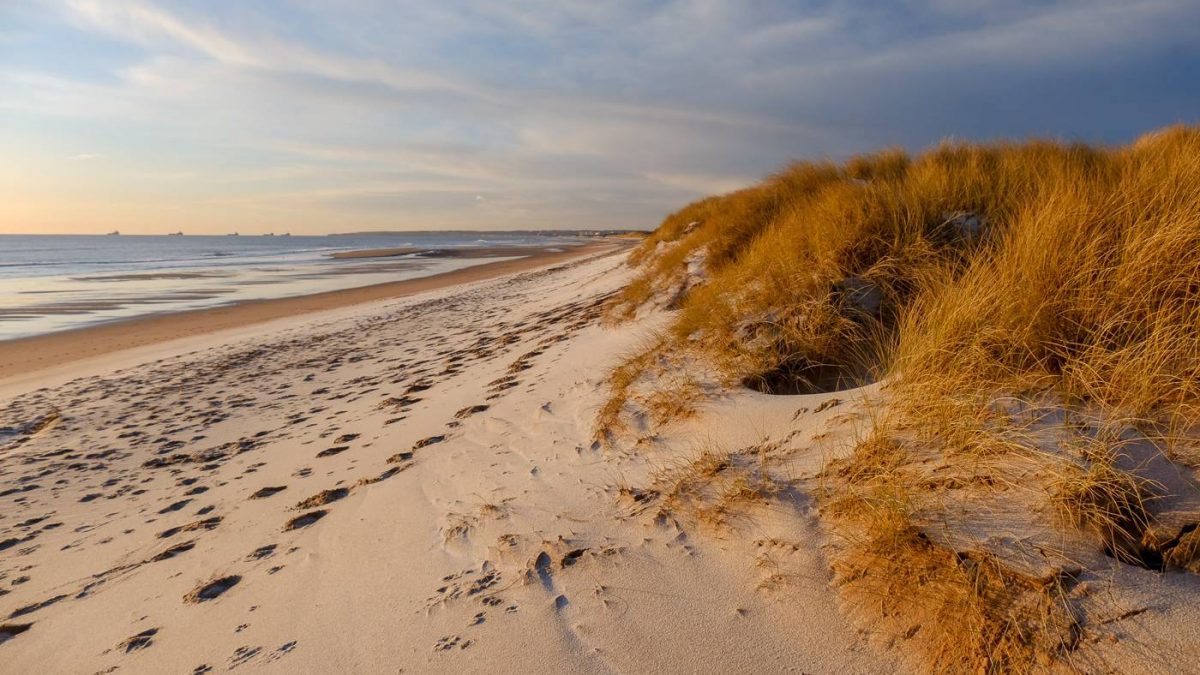 The week commencing 19th August was going to be my Antarctic Odyssey rehearsal week, and as such a fairly epic and momentous week for me. It was another milestone in my preparations. The objectives for the week were: to test my ability to run long distance on a surface similar to the Antarctic snow; test the nutrition plans; test my recovery rates; hit a new weekly mileage total. The keynote activities were to be a 20 – 21 mile beach run on the Wednesday and the Speyside Way Ultra on the Saturday. For good measure I threw in a 15 mile spin bike session and strength training on Monday; a 5 mile run on Tuesday, 4 mile recovery walk on Thursday, and a total 7 miles walking to and from work.

On Wednesday I headed out of the office at 3 to get down to Balmedie beach for 4pm where I had arranged to meet up with a friend, George, who would run with me. Balmedie beach is about 14 miles long in total and runs north from Bridge of Don on the edge of Aberdeen. We would run 10 miles out to the Ythan estuary and back. Another friend, James, was going to provide some vehicle support dropping me off, then pitching up at Balmedie a bit over 5 miles out, then at the estuary, back at Balmedie and finally collect me back at Bridge of Don. I was to ensure that I was taking fluids regularly and taking nutrition every 5km/3miles. This would simulate the checkpoint/support access in the Antarctic 100km. The plan was to run intervals of 12 minutes running and 3 minutes walking. I would take fluids every walking interval and nutrition every 2nd walk.

Although the tide was going out, it was still quite high as we set out so the first 5 miles were run on a mix of soft and wet sand and often on an awkward camber. Progress was slow and awkward, but we just got on with it chatting as we went and enjoying the quiet.  It was a lovely evening, but warm and we both began to feel the effects of the heat. We gradually managed to transition off the soft sand and camber onto the damp, firmer sand. There was a bit of splashing through streams and so wet feet were the order of the evening. I kept right with my nutrition ensuring that either energy drink, or gel was being taken every 2nd walking interval.

We reached Balmedie a little slower than I had expected, but were relaxed. There were a few more people on the beach at this point enjoying the warm, sunny evening, including a group of wake boarders.  A quick stop, a quick check on rations and we were off again.

The next leg was stunning. The beach and dunes bathed in the early evening sun. We literally had the beach to ourselves, apart from a lone barefoot runner with his dog on one section. There was a slight moment of uncertainty as we reached 10 miles but were short of the estuary and unable to make it out or see James. Another half mile though and we were there, in good time too. We had been faster over this section.  We took a slightly longer stop this time. I wanted to get a decent amount of food down me, plus I was starting to feel a bit of gastric distress. While stopped I realised that the ‘rocks’ on the other side of the estuary were in fact seals.  Their calls sounded almost human and quite plaintive. It was an added bonus to a lovely evening run. After a few minutes we were on the return leg.

Again we made good time back down to Balmedie, which was pretty much deserted by the time we got there, although the wake boarders were still out. A very brief stop and we were off on the final 6 miles. We were getting tired now though. The sand is an unforgiving surface, it give nothing back. You work hard. Our conversation began to falter a little and there were shorts periods of quiet. Our form began to go and the tired shuffle began. George pointed out that the high rises of Aberdeen seemed a long way off and not getting any closer. I had been studiously trying to avoid looking them. We plodded on ticking off the miles, but beginning to stiffen. Finally we spotted James waiting for us, a welcomed site which spurred us on. We clocked just over 20 miles in 4hrs 14 minutes as we reached James. That was faster than I had anticipated. The last half mile from that point back to the car park was all soft sand, and we decided to walk.

It was a good feeling to have completed this run. It was faster than anticipated, I coped with the surface and I got my nutrition almost right. With hindsight I should have taken an electrolyte drink. It was hot and I sweated more than anticipated and so my electrolytes got a bit low and I found it difficult to take on energy in the last 6 miles. I also think that the energy drink I had with me contributed to the gastric distress.

All things considered a good run in a beautiful location in near perfect conditions. Test one complete. I now have a degree of confidence that I can cope with the surface. Now, I had to rest and recover for the ultra on Saturday.