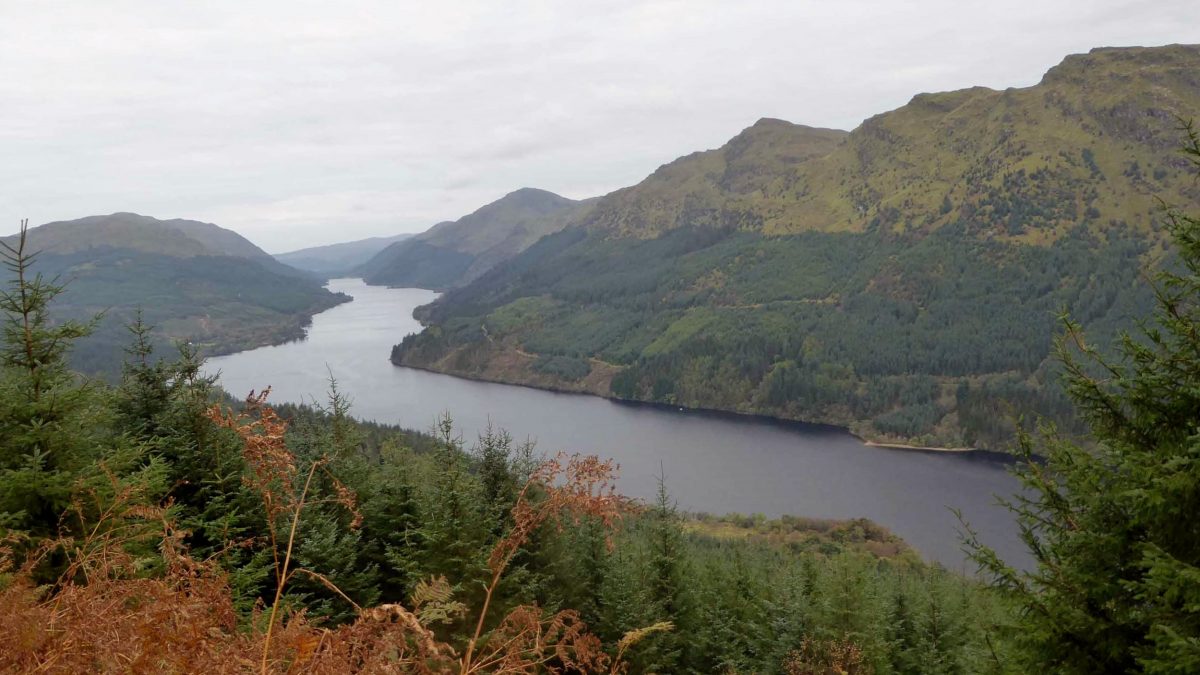 And therein lies a story. When I caught sight of a new ultra-marathon signing up was a no brainer, and so I entered the inaugural Dunoon 50k a good few months ago. Note the zero after the five there and the ‘good few months ago’.

Then in a fit of over enthusiasm and over-indulgence, and having temporarily forgotten the date for Dunoon, I subsequently entered the Marathon de Ben Nevis (40 miles) without realising that the two were only a fortnight apart. Oh well, it would be a good start to ramping up for the Global Odyssey.

The epic that was the Marathon de Ben Nevis behind me and after a week’s holiday I threw some drop bags together, double checked the ferry times and was set to go. Up at five fifteen and away by six with a cup of tea and a pack breakfast I was heading for Gourock. In all the thirty plus years that I have lived in Glasgow I have never ventured to Gourock, much less Dunoon. I had vague memories from childhood of standing on the pier waiting for my father coming in off a boat after a day’s coarse fishing and that was about it. It was an easy journey down and after a quick skirt round the one way system after missing the turn-off to the station I was walking the long walk down platform 1 to the ferry terminal. I was in good time so sat and ate breakfast during which time a number of other runners appeared.

The crossing is only 20 minutes and several of us decided to sit in the open air and view the sunrise which did not disappoint. For once the forecast was good and set to be dry which was a welcome relief after the biblical conditions encountered a couple of weeks earlier.

Race control was set up in the newly refurbished pier pavilion which was literally just yards from the ferry drop off. I dumped my drop bags at the assigned vehicles en-route and then registered, sorted out my backpack and was good to go. The organisation so far was impressively slick. Free tea, coffee and pastries (or filled rolls) were available at the nearby Coast Coffee shop and the buses for the start were just opposite. It really could not have been easier.

Once out at Benmore Botanical Gardens there was more tea, coffee and edible goodies. There was a great buzz as people gathered in and around the café and I had the opportunity to catch up with people I had not seen for a while. The start was at the great redwood avenue and it was really lovely. During the briefing we were told that the start would be a little different. Pipers would play for an unspecified amount of time and when they stopped a cannon would fire and that would be the start. The pipers played the game well with a few pauses to fool us and build the anticipation.

Once we were off and out of the gardens the route wound up through Puck’s Glen on a narrow single path. It was lovely, almost magical and reminded me of the elvish landscapes in Lord of the Rings. I would not have been surprised if an elf, hobbit or even a wizard had appeared. After the glen we switched to forestry track and kept winding our way up and up to the first check point and beyond. I had no real plan other than to take it steady especially with only 2 weeks recovery since Ben Nevis, I knew that it would still be in my legs and expected to feel that at some point.

A bit of the way along the track I picked up Fiona Rennie and we fell into step. Another runner called Andy accompanied for a while too. It has been a while since I saw Fiona so it was lovely to trundle along catching up and admiring the views. We both noted how well marked the route was and wondered if it would even be Ray McCurdy proof. We also chatted about the distance. Fiona was saying that she had heard from a couple of other people that it was longer than 50k and was probably closer to 55k (34.5 miles as opposed to 31). Fair enough I thought especially as I was feeling pretty good at this point. It would be what it would be.

The great thing about running where we do within the field is that a minute here or there makes little difference and we can take the time to admire the views and take photos which is exactly what we did when we reached to top of the climb at the radio mast. Our efforts with the climb were rewarded with a stunning view down Loch Eck and an excellent photo opportunity.

A longish downhill during which Fiona and I separated briefly as we both needed a toilet stop, but we were back together after leaving the second checkpoint. The checkpoints were well organised and manned with smiling helpful marshals providing encouragement and even opening and emptying out our drop bags. I was still feeling remarkably good at this point.

The route now undulated back down Loch Eck. At one point we heard cheers which seemed a little strange until we spotted a wedding on the far shore. What a lovely spot to get married! About a mile and half short of the third checkpoint I took a bit of dip and at this point Fiona and I parted company. We all experience dips at different points. I had no expectation that Fiona would stick with me, she was strong and steady and needed to make the most of that, and I had greatly appreciated the 20 miles or so of company. That said, I was catching up with her gain as we came into the checkpoint but as she did not stop I did not catch her coat tails.

I walked a bit out the checkpoint to let the food I had taken settle and then began to pick it up a bit. Joey Wilson came a long beside me and we leap frogged along for a while. There was a flat section on tarmac and I should have been able to pick up the pace, but it was not happening, I had another dip lacking energy and my legs feeling heavy. Ben Nevis was catching up with me as was the under training. Joey and a couple of other runners had confirmed that the final distance was definitely going to be between 34 and 35 miles. This information did not really help my mood, but I was just going to have to suck it up and get on with it.

Soon we were back climbing which was almost a relief, and I used this to cram in some more energy and to get my legs moving again. The climb though was to become relentless. Every time I thought that perhaps the next brow or the next corner would be the end of it I was faced with another climb. On and on. Someone later described it like the climb up Mount Doom in Mordor. That is exactly how it felt.

Then the absolute confirmation about the distance, a 5 miles to go sign. A glance at my Garmin which was on 29.56 miles. I slogged on. We then started to drop and my mood began to improve especially with the great views down to Dunoon which lightened my heart. A last climb and at the top a marshal to say that it was 2.5 miles to go and all downhill. Thank-goodness. This last 4 mile section was in many ways similar to the last 4 miles of the West Highland Way and with that in my mind I was able to feel much more positive and pick up the pace as I always have a good run along that section of the Way.

The one mile marker just at the bottom of the hill before I crossed the road and followed the esplanade round to the finish line on the pier. A great finishing spot. Cheers and calls of well done, a goody bag, tshirt and a really unusual and lovely finisher’s trophy made from the wood of the old pier.

I felt a bit ropey when I finished and my legs flooded with pain, something that quite often happens, and instead of being sensible and walking about I went and lay down. This just made the whole thing worse. Will I never learn? I sorted myself out, had some of the plentiful and tasty food provided, got a leg massage before a quick dicht with the wet wipes and change into fresh clothes. There was a great buzz with a ceilidh band playing and post-race party kicking off, but I decided to head home. There was a comical ‘fast’ hobble along the pier when I spotted the ferry pulling in, which provoked some laughter from Fiona, Pauline and Susan who were already there and getting the same boat back.

It was nice to have some company and a bit of post-race analysis. It had been a good but hard day out. We had climbed a Munro over our 34.5 miles. In spite of my frustration and ill temper during the latter stages and my dead duck impression at the finish, I felt positive about my achievement and I was happy with my 7:18 finish all things considered and especially just 2 weeks after the Marathon de Ben Nevis.

A great inaugural event with a tough but beautiful route, excellent route marking and organisation and well marshalled. I think I might be back for a 2nd bite next year.