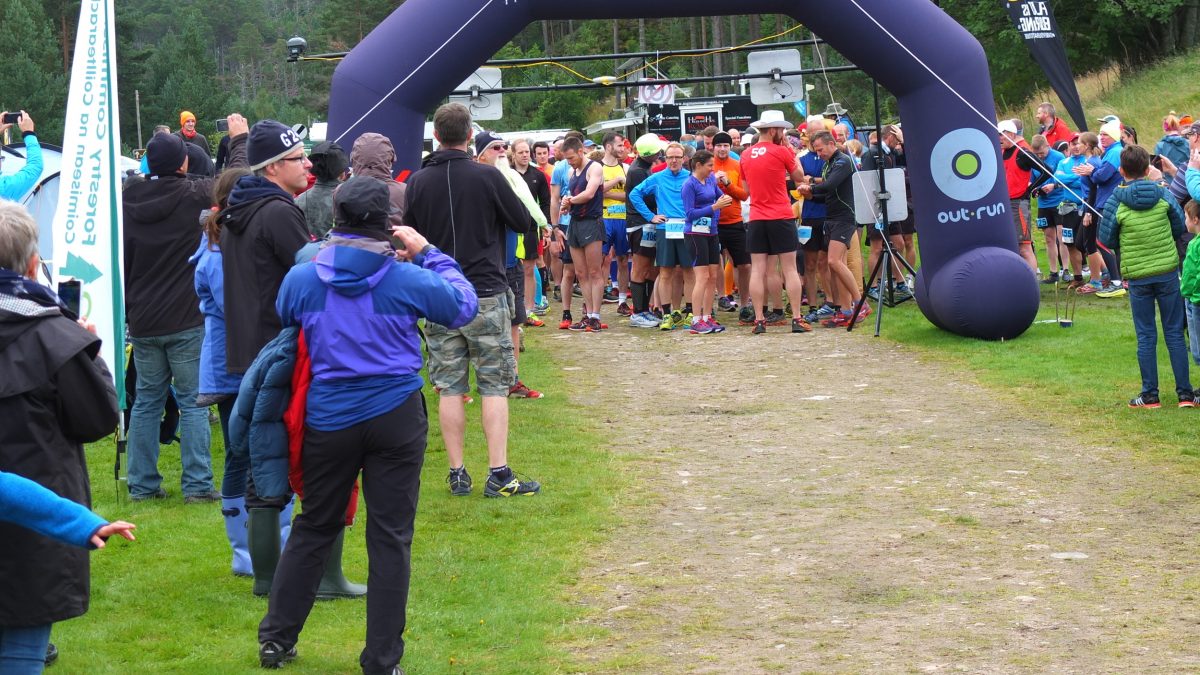 As ever I was a woman with a mission. I set two objectives for my run at Glenmore this year: to enjoy myself and to bag the magic 100 miles and ‘get the horn’, with the priority being the enjoyment. It was also important to me that Alasdair have a better, more comfortable experience this year too, and with that in mind we headed North armed with a gazebo and brazier.

But do you know what? I was hell bent on getting that 100. I had been advised that it might not happen especially after doing the WHW Triple Crown, but that just fuelled the fire and dogged, mule headed determination to go for it.

A bit of a first, I took the day before the event off work! The car was packed the night before and we set out early ahead of the morning rush hour traffic. Our plan was to get to the hayfield early, get a good pitch and get set up leaving most of the day to relax. We were perhaps a tad over enthusiastic and arrived in Aviemore about 9.30am: time to start the carb loading with coffee and cake before heading out to the field. Strangely, we were the first to arrive.

The midges were horrendous, thousands of the little feckers, almost as bad as Kinlochleven, and Alasdair had forgotten to look out the 2nd midge net (in spite of a number of reminders). So there we were with only one net; I offered to give him mine but he declined. A decision he was shortly going to regret as he started to turn into a red mallow man.

We set to erecting our gazebo at a spot at the bottom end of the field. It went up relatively quickly and easily. After a couple of hours we had to beat a retreat back to Aviemore to purchase anti-histamines, a midge net and some citronella candles. Some lunch and more cake at the Mountain Cafe and Alasdair was ready to brave the field again, and face up to the midge onslaught once more.

We finished setting up and then Alasdair retreated to the car while I registered and did a quick tour of the tents catching up with friends.  We then beat a hasty retreat back to Aviemore to check in at our B&B (Carn Mhor), glad that we had not opted to stay at the field given the effects of the midges. We went to Pizza Riach for supper and then made it back to the B&B just before the rain started. We had been having showers since mid-afternoon and more were forecast overnight, but the forecast for the race was good and expected to be dry.

I was awake about 6am on Saturday: argh! What is it with me and sleep, or lack thereof, before big events? Breakfast at 8am, a quick stop at the Mountain Café for coffee and scones to go; and then we were off to the Hayfield which would be home until sometime after 2 pm on Sunday. It was a hive of activity with support crews doing last minute set up and preparation and runner either relaxing or pacing about nervously. Alasdair was also providing support for Lois who arrived shortly after us. There was a bit of shuffling and re-organisation as we adjusted the set-up of the gazebo to work for both of us and make it easy for Alasdair to find and set things out.

Race brief time came all too quickly and then there was that edgy 20 minutes or so when you fiddle with clothes and kit; can’t make up your mind if you need another pee, do you want more fluid? Do you want to nibble something more? We gathered at the start, the horn and we were off.

The first laps are about settling down, re-familiarising yourself with the route, working out where you will be walking especially in the later hours and in the dark. The first 4 laps were fast. Lois and I were pacing pretty much together which I had not expected as I thought Lois would be faster. We were not far off Fiona Rennie, who I had been pretty evenly paced with in other events this year, but Fiona was on top form and I soon realised that it would be sheer stupidity to try and keep pace with her. I ran the first 5 laps/20 miles in 3.53: too fast, but I felt strong and this was miles and time in the bank that would be valuable later. The trick was going to be easing it back a touch and keeping the effort steady and manageable: remain consistent.

I settled into a steady pace, checking off the miles and laps, taking fluids and food regularly keeping my energy levels even and not experiencing dips. Every 4 hours I was taking a double dose of my CurraNZ. Imagined or real, I was finding that my legs would start to feel tired as the 4 hours approached and that within 20 – 30 minutes of taking the CurraNZ they would feel lighter.

Mentally I was in a great place. I was happy, relaxed and enjoying myself and especially enjoying the brief chats and greetings with my fellow runners.

As it got dark, I started to place luminous bands around the track to mark my walking sections. It was a good plan and worked. It meant that I did not have to think about where I was and peer about for other visual markers. I knew that when I saw two bands I start to walk and when I see one I start to run. It was simple and it kept me disciplined.

Alasdair was doing his best to keep us entertained. I as I passed through on one lap there was a haze of stove gas hanging around the gazebo. I know that I needed to keep up a good pace, but I am not sure that gas inhalation was really the best approach. I was informed that the stove would not light. Next lap the stove was on. ‘What did you do?’ I asked. ‘Don’t know. Took it apart and put it back together again’ was the reply. On another pass I got the full ‘man make fire’ experience as he enthusiastically stoked the brazier. Then there was the ‘man have gaffer tape’ pass when one of the gazebo poles broke; the ‘man as gazebo wall’ moment as the wind took down one of the side panels.

My plan was to have finished 13 or 14 laps by midnight. If I could do that, I knew I had a good chance to get the 25 laps /100 miles. I hit 50 miles in 10.37 and completed my 14th lap shortly after midnight: I was in a great place, so I am not sure where the full-on grump fest diva strop came from, poor Alasdair. I was so focussed on keeping stops short that the moment he appeared to be faffing I got impatient and the strop bubbled up to the surface. He was of course not faffing, and my perception of how long I was stopped was totally skewed because I was tired and all logical thinking was long gone. At one point on another stop I was concernedly be-rating him for not eating. There has to be an irony there.  In the early hours there were a couple of teary stops too. It is all part of the emotional rollercoaster that is a 24 hour race.

It always gets very lonely in the early hours of the morning, and I decided that if I could find someone to do an odd lap or so with me it would help me keep focussed and motivated. I saw Gordon Reed arriving to do his stint at the 2 mile water station and asked he would be up for doing a couple of laps when he was done.  He was. I really appreciated this as we had only met that morning as he had travelled up with Lois.

Gordon joined me on lap 18 and then did alternate laps. They were not the most sociable or chatty laps, but I appreciated the company. I was definitely tiring now and my left knee was starting to hurt especially on the rougher sections and downhill. I was really glad of those fast laps early on. The goal was in sight though and barring a disaster I was going to do it. Dawn approached and the head torch was ditched roundabout 6.30ish. Alasdair had another surprise for me as roundabout this time: a gazebo with no sides!! The weather was good, but that good? Would I come back after the next lap to ‘taps aff’ sunbathing? Apparently, it was the wind pulling the panels loose. What wind?

The laps and time ticked over. I was in one sense relaxed and able to distract myself from the pain in my knee by focussing on my now very achievable goal. As I finished lap 23 I saw Robin Wombill and got a huge hug, what a boost that gave me. I asked if he would join me for my last lap and he agreed saying that he would run it in reverse and turn when he met me.

Lap 24 was done and enough time in the bank to walk lap 25 if I wanted, and I very nearly did. It was a very slow lap as my knee was now really painful but I persevered encouraged by Gordon and then Robin to keep shuffling. And then there I was on the final short climb to the steps down to the car park. Everyone was cheering and there was Ada, horn at the ready, calling out ‘Come on, Audrey’.

Who would have thought that the sound of an air horn could sound so beautiful and amazing? At that most it was the most beautiful sounds I have heard. I crossed the line and stumbled into Alasdair’s arms amidst shouts and applause. He had been getting worried because I had taken so long to do the lap, but I had finished with just under 20 minutes to spare.  Before setting out on my last lap I had said that I would not do any short laps, but the shouts and encouragement spurred me on and I hobbled on for a few victory laps until the 24 hour horn sounded. I could not even bend down to put my peg in the ground.

Objectives met: I got 100.66 miles and had a blast. Diva strop aside I think Alasdair had a good experience too, although he did rather miss the walking portaloos.

It’s been quite a year with some major achievements: the North Pole Marathon, the Triple Crown (Hoka Highland Fling, West Highland Way Race, The Devil ‘O the Highlands) and Glenmore 24. It has been a physically punishing year too, so I have been enjoying some downtime to recover and now starting back into some easy training and planning my winter training and event schedule for next year.