I never promised you a games room 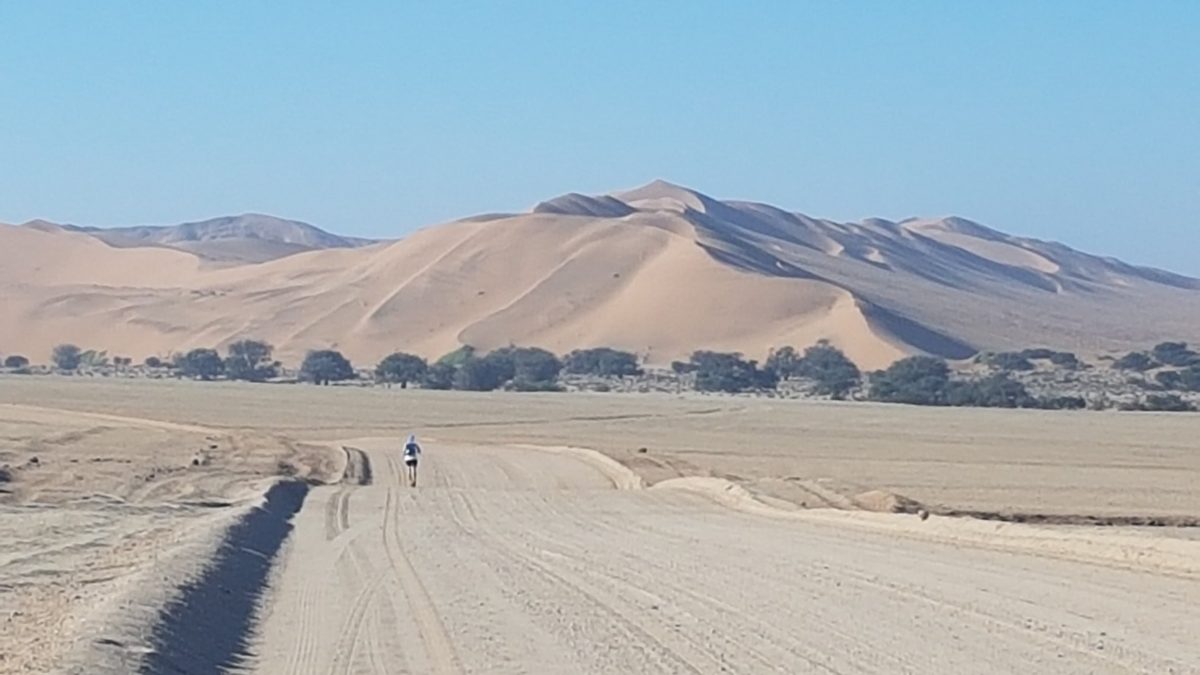 David K: ‘You know you promised Alasdair a games room?’

David K: ‘You did. Didn’t she Alasdair?’

It’s a conspiracy, I tell you! Either that or they took advantage of my heat exhausted, weakened and amnesiac state to coerce me. Either way he is not getting a games room.

I was being nice: they knew it was going wrong

What happened to the diva strops?

The Namibian Odyssey 100k was certainly an adventure and a journey of discovery; just not the one I had expected. How wrong did it go? Spectacularly wrong. They say, that if you are going to fail; fail with style, get eaten by a leopard or something of that ilk. Failing because you are bit pooped simply lacks panache. I can give Cyrano de Bergerac a run for his money when it comes to panache.

I do not actually remember how the final scene played out as I began to weave across the track, but apparently it goes a bit like this:

She’s weaving; got the lean. Right, Alasdair and David K; you get out and walk with her for a bit.  Distract her with a bit of Statler and Waldorf back chat. Motivate her.

Statler and Waldorf thought bubbles: Are you kidding? I’m not sure how long I can walk in that heat.

Truck pulls up. I start to topple backwards, manage to right myself. They tell me the plan. Great. Give me a couple of minutes. I clamber into the truck. I clamber out of the truck. I topple again. They bundle me back in the truck. My memory returns shortly after this as I am lying along the back seat.

Boom! Game over and I am withdrawn on safety grounds with heat exhaustion: 27.22 miles/43.77 km. I had pushed myself to breaking a bit beyond. I don’t even have the energy to argue, get frustrated or cry. I feel like I am boiling in my own skin and am morphing into some form of puddle. I did not know it was possible for skin to leak that much.

Every available buff and cloth was being soaked in water and laid over my head and round my neck, a bottle of water placed on my stomach and I was asked to clasp a cold can of coke between my thighs. I am not sure if that was first aid or someone playing out a strange retro 1970s advertising fantasy. I squealed as Alasdair poured ice cold water over me: only it wasn’t ice cold, it was tepid, you could practically shower in it. After about an hour and a half my temperature was normal and now there were three options: I could get out and run another sixty kilometres (unlikely), we go back to the coast and an air-conditioned hotel (tempting, but no), we drive to the planned camp site at Homeb. Let’s camp I say. At which point I crash out until a bump in the road just about throws me off the seat.

The only bar open in town

Rewind 48 hours. We arrived in Windhoek via Frankfurt and Johannesburg and spent the first night in a nearby lodge before the long drive to Walvis bay on the coast.  En-route we had the customary stop at the wood carvers market where some haggled better than others: always have David K haggling your price.

What were the chances of being booked into the only hotel in town with a bar that is open on a Sunday night? We managed it, and said bar was going like a fair and sounded like a fair until 1.30 am. I often don’t sleep the night before an event at the best of times, and I certainly wasn’t sleeping that night. After a long haul and a couple of disturbed nights fatigue was inevitably going to be a factor.

The well informed (or not so well informed) know that every night a fog rolls in off the Atlantic over the desert dunes cooling them down and providing much needed moisture. The prudent runner takes advantage of this and starts in the pre-dawn darkness and cool to get a few hours of reasonably temperate running. I notice as we drive along the coast to the start point there is no fog. Where’s the fog? Why is it so warm? Apparently, the fog does not come in every night. What? Our guide Danny says it is going to be hot and the heat will build early and quickly. No problem!

Is that a runner I see before me?

I clip through the first 10k at a fair pace; probably too fair. Night gives way to dawn and the landscape gradually reveals itself. Hills in the distance ahead, harsh desert to the left, the red dunes to the right their progress stopped by the Kuiseb river bed. It is quite lunar.

Along the way there are occasional settlements of shacks. Now that it is light the heat is building. A bit before 20k I pass a school. Yes, a school in the middle of the desert, complete with children in uniform attending assembly and singing in the playground. This is worthy of a short stop.

On I go, still too fast through 20k my schedule is a blip on the horizon behind me, lolling about on the beach.  In the distance I spot another runner: a runner? Am I hallucinating? There is indeed a runner coming towards me, loping along, looking super cool with a huge set of headphones on. We do that usual runner thing; a nod of acknowledgement as if there is nothing at all unusual about this.

I was probably in trouble at 30k but just did not realise. I took refuge in the truck and went from dry skin to sweat literally pouring off me. After a quick snack I was off, but slowing significantly as the heat continued to build from 20 to 29 degrees. I have run in higher, but this felt hotter. The heat was oppressive, bouncing off the track. I began to feel as if I was fighting the terrain trying to convince myself it was just a dip. The next check was around 39.5k and David S had a change of plan.  He was pulling the long stop back from 50k to 45k. All I had to do was get there however slowly and then have a good break and a rest.  Only I didn’t make it and we are back to where this post started.

The one-eyed goat dog and the milky way

The rest of the day was salvaged by a tour of the desert and the Kuiseb canyon which was much more interesting for the chaps than support duties.

I had perked up enough to enjoy the scenery too, with plenty geography and geology to admire.

We had a scary near vertical drive down into the canyon: there was a track apparently.

Once in the canyon we drove along it to Homeb where a comfortable camp or rather glamp was set up. We even had the luxury of a portable shower.

The evening highlight was a braai which is basically a wood fired barbecue. According the Lenny (one of our guides) I needed a good braai to feel better. The braai was indeed very good.

Wandering around was the one-eyed goat-dog; one of Lenny’s. It was blind in one eye after an encounter with a cobra; and after being suckled on a goat (as you do) it had become part of the herd, following the goats wherever they grazed.

Before bedding down for the night Alasdair went to view the night sky. He was so impressed that he came and got me out of the tent to also look. I had never witnessed the full arc of the Milky Way before and it was spectacular, worth being dragged out of bed. We even saw a shooting star.

The night time wildlife was deafening: it gave the hotel bar a run for its money. This included some sounds that you don’t really want to hear outside your tent and which make you want to stay in the tent: we think hyena especially as it set the dog off. In the morning I learned that Alasdair went out for a second look at the stars and managed to get himself disorientated and lost in the trees. I am not sure if that brave or stupid.

Next day we headed back to Swakopmund by way of the Tropic of Capricorn for a rest day and a night of luxury in a hotel with lodges overlooking the dunes.

Stuffed and in the museum. Despite their hardest efforts the guys did not find a chameleon whilst out on the desert (again). But we did spot the city gent chameleon in residence at the Swakopmund museum: that is what the little ‘feckers’ look like!

The last couple of days and our wedding anniversary were spent at the Erindi game reserve in a lodge in front of a waterhole. We had an exciting drive in as the tracks turned to mud and rivers during a storm, and with an hour of arriving we had spotted hippos in the waterhole and a several varieties of antelope.

There was a very special trip to visit a small group of tribal nomads; the San people and see their way of life in the bush. Erindi was part of their tribal lands.

Whilst driving through the reserve and later, on a safari drive we were lucky and privileged enough to see lions sleeping off a kill and a huge bull elephant as well as crocs, giraffes, zebras, ostriches and warthogs.

An awesome way to spend our wedding anniversary and end the trip.

Tourist eaten by a leopard

A couple of days after we left the Kuiseb a news report came out that a leopard (thought to have been injured by poachers) had attacked and seriously injured a tourist (camping out with the official campsites) not far from Homeb. Lenny had chased a couple of leopards out of the camp area just a few days before our arrival. A reminder of how important it is to get permission to use the official camps, and to have local guides and, of course, the one-eyed goat dog.

What doesn’t kill you makes you stronger

I would be lying if I said that I didn’t get a fright. Was it simply one of those two times in ten when for no rhyme nor reason the heat gets you?

Did I fail to prepare? I was fit and strong and ready to run 100k, but I didn’t do any acclimatisation training: that may or may not have made a difference. There are diverse opinions on that.

Did I fail to plan? Did I head in a bit too relaxed? Maybe. Put it this way, there is now a run plan, nutrition checklist and plan, trip checklist and a set of lessons learned for the Gobi Global Odyssey 100. Things will be done differently. After a tentative start I am back in full training to be ready for the Great Glen Way in July and the Gobi Global Odyssey 100k in August. And just to show I am not to be beaten I have signed up for the 100k Ultra Mirage el Djerid in Tunisia for my second crack at the African Global Odyssey 100. I seem to be collecting deserts.

The return of the chimp

Ah, hello my old friend and adversary! He has been absent for a while sitting quietly napping in his cage, but he has awakened and broken out of the cage. Perhaps no bad thing given the forthcoming challenges. A healthy dollop of nerves to keep me focused.