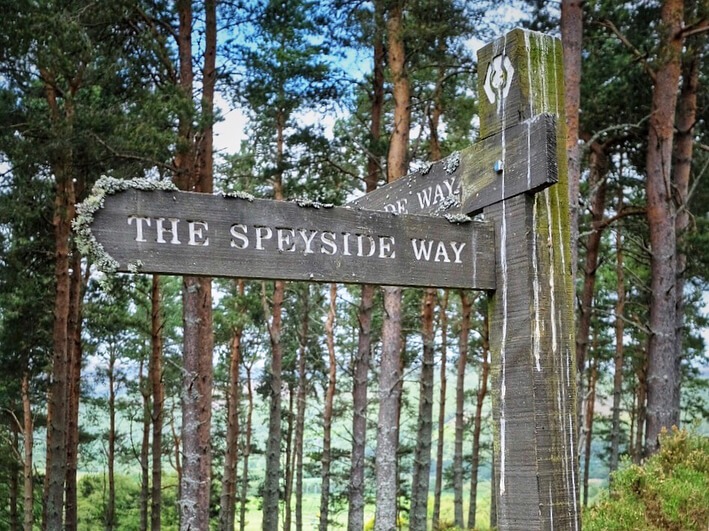 The Speyside Way is a national trail that runs from Buckie to Aviemore, following the route of the river Spey, and by default the Scottish Whisky trail . The Speyside Way Ultra covers 36.5 miles from Ballindalloch to Buckie and has been run since 2012 and is well organised by race director Sarah Louise Grigor and a band of dedicated and happy marshals and helpers. This was the first time I had run this event, and it special for several reasons. It was my last ultra event before the Antarctic challenge, it was my first flying solo ultra, and it was the culmination of a big training and rehearsal week: so pretty momentous really.

I did a long day in the office on Friday (7.30am to a bit after 5pm), then headed back to the flat where I had the usual indecision about what kit to wear and take with me; and went through the lengthy process of agonising over exactly what should go into each of my drop bags, which inevitably results in to much. By the time I had done that and eaten it was about 9pm. I was just settling in front of the telly, when a text from a friend suggested that I should be in bed getting some rest as I had an early start. I took the hint and headed to bed for about 10, as I had to be up at 4am. Normally, I sleep very badly the night before an event, not this night. I dropped off to sleep quickly, listening to the rain batter off the roof. I woke at 3.55 am, and the rain was still battering off the roof.

A quick breakfast of scrambled egg, toast, green tea and apple juice mixed with coconut water and water, and I was in the car heading out of Aberdeen by 5 am. I arrived in Buckie at 6.20 where it was misty but dry, registered and then settled down to do those last minutes routines and rituals that all runners have. Run to the toilet 20 times, pin your number on then re-pin it, go through your back pack 20 times, get some more food and fluids down. Text expected timing info to a friend with a request to call me if they had not heard from me by a given time. I also acquainted myself with the race sweeper as I was sure that after the mileage I had done this week I would be at the back of the pack keeping him company. Then onto the buses to the start: chilled or what – I actually dozed on the journey down to Ballindalloch! Off the bus, final toilet stop then in no time at all it was the race briefing and we were ushered to the start. Conditions were pretty perfect: mild, perhaps a little on the warm side, dull but bright and dry.

Of we went and yes, I was soon drifting along at the back, almost, but not quite in last place. The first 12 miles are flat, and so I kept to my now trusty routine of run 12 minutes, walk 3 minutes and using the walking intervals to get fluid and food on board. The Speyside Way is stunning, really beautiful, and I relaxed into comfortable pace and enjoyed the landscape around me,  following the lush valley along the Spey running through a mix of woodland and farmland. I felt good and fresh. There was no residual tiredness from the beach run I had done just 3 days earlier.

A small group of us spent the first 12 miles leap frogging each other all doing slightly different interval patterns. One of my fellow runners was Tricia who I have known for several year. We had bumped into each other at registration and sat next to each other on the bus down. We were running our race, but there was time for a quick word or 2 as we passed each other, and we pretty much kept each other company in that way for most of the race.

There was quite a bit of evidence how well the whisky industry is doing over that first 12 miles, lots of new building and expansion work to some of the major distilleries that we passed. Also, every now and again there was that rich pungent smell of the mash process that heightened the senses and warmed the spirit. It was also clear that summer was drawing to a close with the damp earthy smell that surrounded me and the rich crops of wild mushrooms and fungi along the path.  Yes, definitely mushroom season.

Soon we were passing through Aberlour and on to Craigellachie (12 miles) for the first drop bag. As I had predicted there was too much in my drop bag. I downed some creamed rice, an espresso shot tin grabbed some extra gels, a bottle of coke and a sandwich, ditched some sweets and biscuits. The marshals were great helping me sort out my bag and encouraging me not to hang about and get going. Messing about with my bags was not a diversion I was allowed to indulge.

I was starting to catch up with a few runners now. After Craigellachie there is a bit of time on the road which undulates to the foot of Ben Aigen where you rejoin the trail and do the final ascent up the ben. I was still feeling good and strong and, mentally, very positive; so much so that I ran small sections of the uphill rather than my usual ‘always walk the up hills’. The woodland was lovely and still and so peaceful. The colours were amazing, rich earthy greens and browns, and the deep purples and pinks of the heather which was in full bloom.

There were 6 of us all within yards of each other, all taking the lead at some points and dropping back at other. I fell into step with Craig & Carolyn and we chatted and encouraged each other for a mile or so. It seemed like no time at all before I was starting to descend and trying to decide if this really was the decent or if there was more climbing. I threw caution to the wind and upped the pace to make the most of the decent. There were more happy cheery marshals to keep us right as we headed off down through the trees. I pressed on and then another long section on tarmac, a surface I am comfortable with and so I pressed on keeping my pace up and managing to get back into a regular 12 run 3 walk intervals. A steep downhill followed by a steep incline and I was at the second drop bag point at Fochabers (25 miles).  My time was good, ahead of what I had expected at this stage. Maybe time to adjust that expected finish time.

Once more I had cheery marshals helping me to sort my bags and encouraging me to get back out and onto the final leg with was basically all downhill to the coast. Most of the drop bag contents got ditched, but I had more rice and espresso shot and picked up more gels. One thing I had learned over the previous section of the race was that whilst snakca-jacks are a good low fat high card savoury snack, they are like glue in your mouth which tends to get a bit dry when running. So they and similar snacks got ditched.

I was still feeling good and strong which was giving me a real mental boost because I had not expected to be like this. I had expected to be tired and heavy legged. I just pressed on and passed a few more runners. By 30 miles though I was starting to feel it, and was beginning to tire. My form was going and although I was sticking to my intervals I was aware that the running was getting slower. I reached the estuary of the Spey and after that it would be coastal path. There was a shift from the dull but bright conditions to a slightly damper misty atmosphere as we reached the coast. There was a lovely surprise at the last water station at about 30 miles. I saw a figure jogging out to meet me and it was Sarah Louise with a big smile and encouragement. That really gave me a boost; then a turn onto the coastal pathway and less than 6 miles to go.

I was tired though, and my brain kept saying walk, just walk a bit more, but I kept strong and stuck rigidly to my intervals. I was just thinking how good it was to get through an event without a fall, when bang, down I went. Not again. A real case of pride before a fall. That momentary lapse of concentration when you are tired and not picking up your feet had got me again. Ouch, that hurt. I lay there for a second wanting to cry, but what was the use of that.  I picked myself up quickly and got going, walking a short distance to check how everything felt and urging my body back into a jog and finally something resembling a run. I was off again. Then it was 2 miles, 1 mile and finally, that magic word half a mile to go. There was one final sting in the tail, a short steep uphill before turning into the park and the finish line, to be met by Sarah again with a big hug, a well done and a medal.

I had done it. I had completed my Antarctic Rehearsal week strongly and with a degree of panache. I can hardly measure what this meant to me and how much it has boosted my confidence for the challenge ahead. I managed to race without a support crew, I managed to recover well between hard efforts and I managed to get my nutrition pretty much spot on with now energy spikes or lows. Another milestone checked off in style.