The Devil ‘O the Highlands: A devil with a sting in the tail 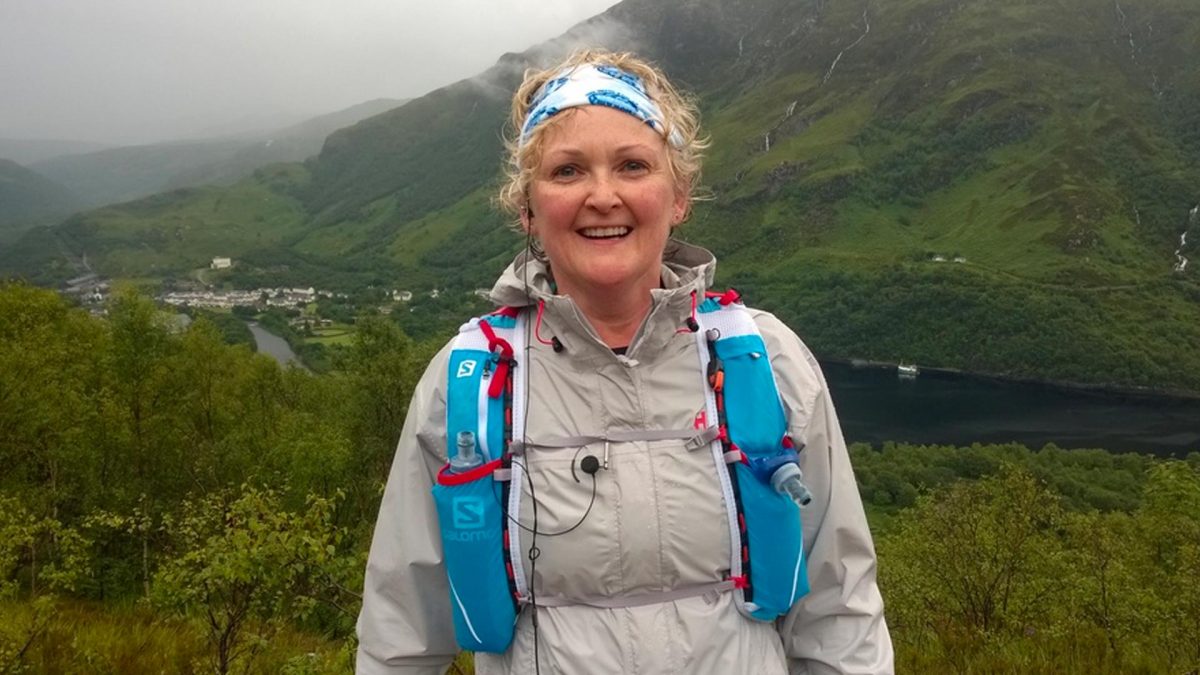 I am not entirely sure how I found myself at the start line of the Devil ‘O the Highlands just six weeks after running the full West Highland Way race. The Devil was never a race that I had seriously considered doing, and the Triple Crown (the completion of the 3 WHW races in the same year) was something that was only vaguely on the edge of my radar, and again, not something that I was too bothered about. Generally, I am not a ‘box checker’, picking my events based on my own objectives and goals. But there I was, toeing the line and looking set to get the Triple Crown.

When I heard that John Duncan was taking over a race director of the Devil it became more interesting, but I was still unsure. My focus races for the year were the North Pole, the West Highland Way and Glenmore 24; and the Devil sits uncomfortably in between the latter two with barely enough recovery time from the WHW and then only five weeks to pick up for Glenmore.

Then the feeding frenzy that is race entry came. Gone are the days where you can mull things over and wait and see how you feel nearer the time, now it is a case of ‘you snooze you lose’ with many races selling out in hours.  Entry opened, I sat poised, I procrastinated, I sought counsel from friends and of course was given a case for both entering and not. In the end I entered. I did this based on the logic that I would rather have the place and the option. After all, I have the freedom of choice and could decide to run or not based on how I felt. But in reality there was never any doubt, having signed up and paid the entry fee I was going to be there.

A 2.45 am alarm call with a 3.15 pick-up. Alasdair had plans for the day and was getting a day off race support and Liam McGregor had kindly offered to fill his shoes and provide support. Soon a small convoy was heading up loch Lomond side in the grey, damp and misty dawn.  Registration was in the Green Welly Shop which soon filled up with excited runners. Brief hellos and exchanges and a cup of coffee and I was ready. Liam remarked that I seemed very relaxed about it all.

The forecast was not great. It had improved slightly, but one thing was guaranteed; at some point we were going to get heavy rain showers and we had been instructed to carry full waterproofs. The morning dawned cloudy and wet. There had been heavy rain overnight, but after a brief shower it was dry for the start.

Six o’clock and we were off. I struggled to get going and to get any sort of rhythm. My breathing was laboured and uneven and my heart rate shot up to maximum very quickly. This did not feel comfortable at all. I slowed and walked a bit to try and settle things down which worked except that my heart rate was refusing to drop. It was close and muggy and I soon got very warm, so the jacket and the long sleeve top came off.  I concentrated on trying to relax and get into a gentle rhythm: after all I had nothing to prove beyond getting a finish and I wanted to enjoy this.

I took time to stop to take a couple of photos, and fell into step with various people for a chat at various points.  It started the feel good, but my heart rate remained close to maximum. Bridge of Orchy came soon enough and I ditched the long sleeve top with Liam but kept the wind shell which is showerproof. I grabbed a carton of juice to drink whilst walking the climb out of Bridge of Orchy. In spite of my stop and starts I was 10 minutes ahead of plan.

I found that I was leap frogging along with Katie Hall, David Searil, Ruth and a couple of others, with Lois Simpson just that bit ahead but always just out of reach: that girl can yomp! I think that out of all of us I was struggling most. I think I knew deep down that I was not recovered enough. It was the usual scenario of me being able to pull ahead slightly on the climbs but then being overtaken on the descents. I was descending like a 90 year old; perhaps overly cautious of falling, something I really wanted to avoid today. My elbow is still sore after a fall during the WHW. First climb done: all good.

Rannoch Moor was grey, just grey. It was that sort of grey that is not even particularly atmospheric. The moor is at its best on those days where you have sunshine and cloud with the light playing over the lochans and hills. It was bit of a slog, but that is what the moor is. Just as I was nearing the peak it started to rain, a short heavy shower, but nothing my wind chill jacket could not cope with. Then the unexpected: just as I was getting into my stride for the descent to the ski centre stomach cramps and an urgent need to jump off the path for a rather unpleasant pit stop. And to add insult to injury I jumped into a very waterlogged patch of moss which filled my shoes with water. I was left feeling a bit blergh with my mood as grey as the weather when I came into the check point. On a positive note I was 20 minutes ahead of schedule.

I tried not to grump while changing my socks and shoes and getting some food in. We had a quick discussion about clothing: change of top? No, ok; and then that all important waterproof or wind chill question? Let’s face it: it was always going to be the wrong decision: I opted for wind chill. The skies looked ok down through Glencoe and over towards the Devil’s Staircase. We thought it would probably just be odd showers like we had just had and the wind chill could cope with that.  That was tempting fate.

Off I went: a cheery hello from Noanie and Lorna as I crossed the road and then a steady pace to the bottom of the staircase where Liam handed over some snacks to eat on the way up. I did not attack the staircase with my usual gusto and I felt a degree of consternation as I was overtaken by a couple of the others. Oh well, not worth worrying about.

Fiona and Pauline were at the top providing colourful and cheery encouragement with jelly babies. Second climb done and I was looking forward to making a good reasonably speedy descent into Kinlochleven, but then the rain started and it was more than a shower. I was about to pay the price for my decision. It was relentless and the path quickly turned into a stream and I could not have got any wetter. One positive though: I was definitely coming down quicker that in the dark during the WHW.

As I came into Kinlochleven I was only 12 minutes ahead of schedule so had lost some time, but it was not a concern. I was going to have to change clothing and footwear and get my full waterproofs on. Liam suggested that I get into the car to eat and dry out. I hesitated momentarily and then decided that he was right. Not everyone had that luxury, and I did feel slightly guilty, and it did lose me time and places but it had to be done.

Time to get going and I left Kinlochleven with Rhona and Graeme McKinnon. They pulled ahead on the climb up to the Lairig Mor. I trudged along and caught up with Susan Murchie who was a bit surprised to see me as she thought I well ahead of her. I explained that I had been a bit wimpy and decided to spend a bit of time in the car. We reached the top of the climb together; third climb done, and then I started to pull ahead edging closer to Rhona and Graeme.

The rain eased and pretty much stopped as I reached the Lairig cottage where I had to have another uncomfortable pit stop, shortly followed by another one. By this time Rhona and Graeme had all but disappeared on to the horizon. The track was so wet and water logged it was like running 7 miles in a stream. I knew I was losing time and I felt miserable. This was not much better than my WHW experience. Then the mercurial weather changed and the sun came out. My mood brightened, but my energy levels were low. They had been fluctuating wildly throughout and as ever I was struggling with the eating. A mini can of coke and, of all things, a Mars bar had gone down well and provided a much needed boost.

A sight for sore eyes at Lundavra: Robin Wombill always cheery and encouraging and a provider of much needed hugs.  Looking at my splits I was half an hour over schedule, with that section taking me 45 minutes longer than planned, but that included the time spent in the car. I took a few minutes to have some water and an espresso shot can before heading off on the last section.

I made good steady progress through the woods and once on the fire track managed to pick up the pace down to the Braveheart car park as a series of heavy showers pulsed through. Now, we knew that John had changed the finish and there was another hill, but seriously, he was taking the proverbial! I paused briefly as I looked at the climb ahead, and once on it, it just kept going and going, on and on and just kept giving. Pig headed determination kicked in and I pressed on as hard as I could; I just wanted this over and done with. I could see Rhona and Graeme just ahead surprised that I had caught up. Finally, on the last bit of the climb I caught glimpses of the finish line in the park below. The path double backed on itself to descend to the park. Into the park and around the play area and there I was heading for the finish arch, arms aloft.

That was it, job done. I was still half an hour over schedule, but not too far behind some of my fellow Triple Crowners. It took a while for the achievement to sink in, and it is an achievement, but for some reason I was and am not as ecstatic as I expected to be. It seems a bit of a hollow victory. Maybe this is because I struggled during the Devil and did not enjoy it as much as I had hoped. Or maybe it is just because at this stage of my running year I am physically and mentally tired, perhaps more mentally than physically. I don’t know. Maybe elation will creep up on me.

My experience aside, it was a great event organised with John’s usual skill and aplomb and really well supported by cheery and encouraging marshals. I am especially in awe of the team at Kinlochleven who delivered above and beyond in the torrential rain and who did not have the luxury of being able to shelter in a car for twenty minutes.

II now have to move on, recover and get my head in the right place for Glenmore 24.