The tyne’s all mine: Tyne Trail Ultra 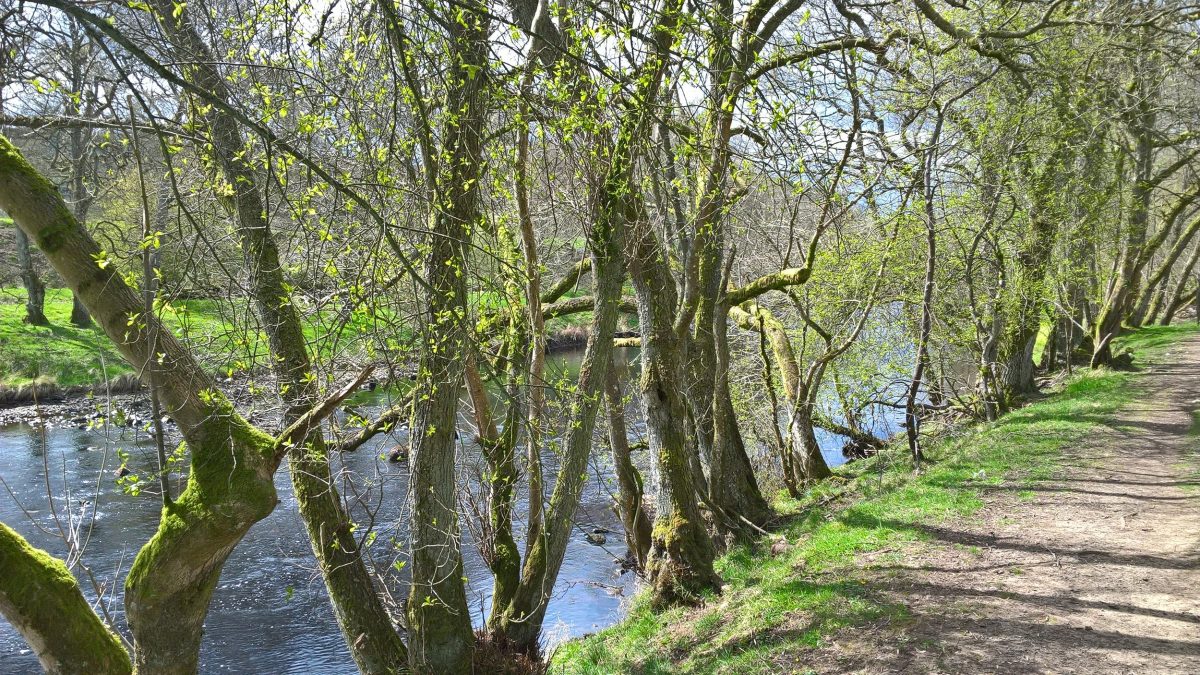 Well, I had to really. Just couldn’t resist it.

The inaugural Tyne Trail Ultra followed the new Tyne Trail from source to sea. The trail has been established by the Daft as a Brush charity which provides cancer patient care services by provided staffed transportation to and from hospital for cancer patients undergoing chemotherapy and radiotherapy.

The 2017 event followed the trail from the source of the North Tyne to where it meets the South Tyne at Warden and on to Newcastle where the Tyne flows into the sea. The event provided a 75k to the where the rivers join or the full 140k. (In 2018 the South Tyne Trail will be run).

This was another foray across the border searching for some new events, and my 2nd into Northumberland in 3 weeks. There was a touch of Groundhog Day as the source of the North Tyne is up on Deadwater Fell and our route would take us from there down Kielder Water and over the dam, covering sections of the Kielder 80 route in reverse. After my Kielder adventure I was really hoping this would have less bog wading and heather whacking: it did, phew! But you should be careful what you wish for. As the route heads south from the dam there is quite a lot on road as well as on riverbank and woodland paths with a good scattering of short technical section. It would have been easy to assume it would be a relatively easy route with the tarmac and an overall downhill profile; but those who had not consulted the course profile were in for a surprise as the route undulated along with a fair amount ascent accumulating.

Playing the long game with my events this year I had opted for the 75k and we based ourselves in Hexham just 3 miles from the morning pick up point and finish. A straightforward drive down got us to our lovely AirBnB late afternoon. I opted for a somewhat atypical evening meal. Cheese soufflé, confit duck with gratin potatoes and spinach, ice cream and all washed down with half a bottle of red wine. Certainly calorie loaded and I would find out tomorrow if too rich. Ah, it should be fine thanks to the civilised 7.15 am pick up and 10 am start.

That 10 am start: as leisurely as it was; and as similar as it was to my normal Saturday training routine was the source of my obsession for this race. I have been known to display obsessive compulsive tendencies and there is always something that I fixate on in my pre race week. I think many runners do this. The thing that I started to obsess with was getting lost in the dark. A 10 am start most likely meant finishing in the dark, on a route I did not know and when I was going to be tired and not exactly mentally acute.

Let me share a secret with you: I don’t like the dark. It’s a fear I have had since childhood. I always leave the curtains open a crack and when at home I never shut the bedroom door. Sleeping in a pitch dark room with a locked door gives me the ‘heebs’. It takes a significant mental effort running events overnight.

Back to the Tyne Trail Ultra; cue frantic unsuccessful attempts to download a the GPX to my Garmin followed by printing out of A3 maps, note to put my reading glasses in my pack and to make sure my head torch (which can land planes) was on full charge. Failing to see the obvious here which was maps are not much use in the dark unless you have a compass.

Green tea, scrambled eggs on toast; a banana and a pot of rice pudding in my bag and I was ready to go to the pick-up. The bus was there and waiting as I arrive 15 minutes ahead of the pick-up time. The organisation of the event was excellent. The route was pretty well marked although a few extra markers here or there would have eliminated a few doubts. The check points were well set up, stocked and manned by enthusiastic marshals eager to tend to your needs and offer encouragement. I was particularly grateful for the arm that was offered to assist my hobble down the steps in Bellingham.

An uneventful drive to Kielder castle for registration, tracker picked-up, a cup of coffee and the race briefing, then it was back onto the bus up to the start which was quite literally at the source of the North Tyne.

I love meeting up with and running with my friends and running with familiar faces at events, but it is also good to meet new people and hear their stories and exploits. It is also a good way of learning about new events. There was plenty of scope for that over the day as we leap frogged along. There was also a less than six degrees of separation moment when someone came up to me asking if I was Audrey. The connection: her husband works with a running friend from back home.

The first fifteen miles or so down to the damn were a steady comfortable potter enjoying the woodland at the side of Kielder water and the views. Easy running with nothing too challenging technically or ascent wise. I was happy to take my time. After a brief stop to refill my water bottles and drink some coke I set out at a walk across the dam whilst finishing a sandwich. All was good.

After a short section through woodland the route dropped down to the riverbank again and on to a small village at which point it transitioned on road. There was a lot of road between the dam and Bellingham which was roundabout 26 miles in. I don’t mind a bit of tarmac; (I started running exclusively on tarmac); and it was pretty lanes with good views so what was there not to like? The dead moles were a rather gruesome distraction.

What I did not realise at the time was just how used to running on trails I have become, and I did not realise the impact of that amount of road was going to have. On the last couple of miles into Bellingham, with my Garmin clocking 28 miles, my hips and legs started to really hurt. I clambered up the steps from the river to the hall, desperately trying to smile for Alasdair who was stood at the top, camera in hand. He had said he would only support later in the day if I did not grump. The ‘do not grump’ mantra was playing in my head on loop. I was feeling positive though as I was a bit ahead of schedule and had hit marathon distance in roundabout 5.30.

Stopping was bad, sitting down was even worse and my body just went into distress. My lower back, hips and legs flooding with pain. To add insult to injury stomach cramps started resulting in two trips to the toilet. If I did not make a move to get going soon, I would not get going. I hobbled out painfully hence the offer of the arm. Once back on the river bank there was a fairly flat section where my hobble became a walk, a trot, a jog: I was moving. A couple of miles in I hooked up with David a Scottish ex pat who was doing the full 140k. He was working a run 5 minutes, walk 5 minutes rotation. Seemed good to me and I was enjoying the chat and so settled into it. With hindsight, a bit lazy of me because I probably could and should have run more; but it was not as if I was at the pointy end of the action. Net result though was a gentle berating from Alasdair about my massive underestimate of when I would arrive at Wark. Well, I had based my estimate on 6 to 7 miles not a good 8.

There was a bit of debate about distance to go. Based on my Garmin it should only be another 10 miles. No it was 12 to the finish. That did not go down well with my little inner grump (don’t be grumpy mantra still going). I was getting cold and the soup that was offered and which I thought would be a great idea was not going down too well. I really needed to get moving; time to part company from David. A quick change and an extra layer, my head torch tucked in pack and I was off hobbling along the road: estimated time of arrival at the finish; after 9.

The final 12 miles was mainly road with short sections of relief along the river. There was one lovely section along which fishing beats and pools were marked out and which provided me a good distraction wondering what a friend who fishes would think of them. There were also a few final stings in the tail with a couple of short but steep climbs up through woodland.  I saw a ‘Hexham 6 miles’ road sing. Yippee, only 3 to Warden then, and a glance at my watch indicated that this would be 10 miles total for the section, not 12. My joy was short-lived, we were not going the direct route. Another couple of turns, a bit more off road, another couple of miles, can’t be far now, but then another road sign: Warden 3 miles. Those last 3 miles on the road along a country lane seemed interminable. The people I had seen ahead of me and who I thought I would catch disappeared. Either they got faster or I got slower or both. Another long steady climb and then the last mile was downhill.

As the light failed and dusk drew in it flitted through my head that I should put my head-torch on. Nah, it wasn’t that dark yet and I could see where I was going and the ‘heebs’ had not started. There were bats flitting around through the trees. With hindsight not the most sensible of approaches, to be running along a country lane in the dark with no head torch. I spotted the glow of a street lamp and I was there, turning the last corner to the finish. Job done, but boy was I sore. The toll of the tarmac. Alasdair appeared out of the darkness chastising me for not having my head torch on. Strange considering how much I dislike the dark. I was bang on with my prediction. It was after 9; it was 9.17 and my time, 11.17. I dubbed it a mediocre day at the office, and I was frustrated by how much I had slowed in the 2nd half. In reality it wasn’t mediocre. The time was OK considering I had done Kielder just 3 weeks earlier, and it has been a while since I managed 5.30 for marathon distance on a trail.

In summary, a great event with a good vibe, and as long as you don’t mind the tarmac a good scenic route. Now back to that obsessive compulsive thing. Next year it will the South Tyne from source to sea. There will be a fair contingent who will want to sign up to ‘bag’ the two and keep things neat. I imagine there will a number who having done the 75k will want to progress to the 140k too. This will give the event some longevity and variety for runners. My plan? No idea at this point. My tidy brain will probably want to do the South Tyne and probably just the half distance again. The nights are still pretty long at that time of year and whether or not I would have 140k in me at that time of year is a big question too.

This event is definitely worthy of your consideration.