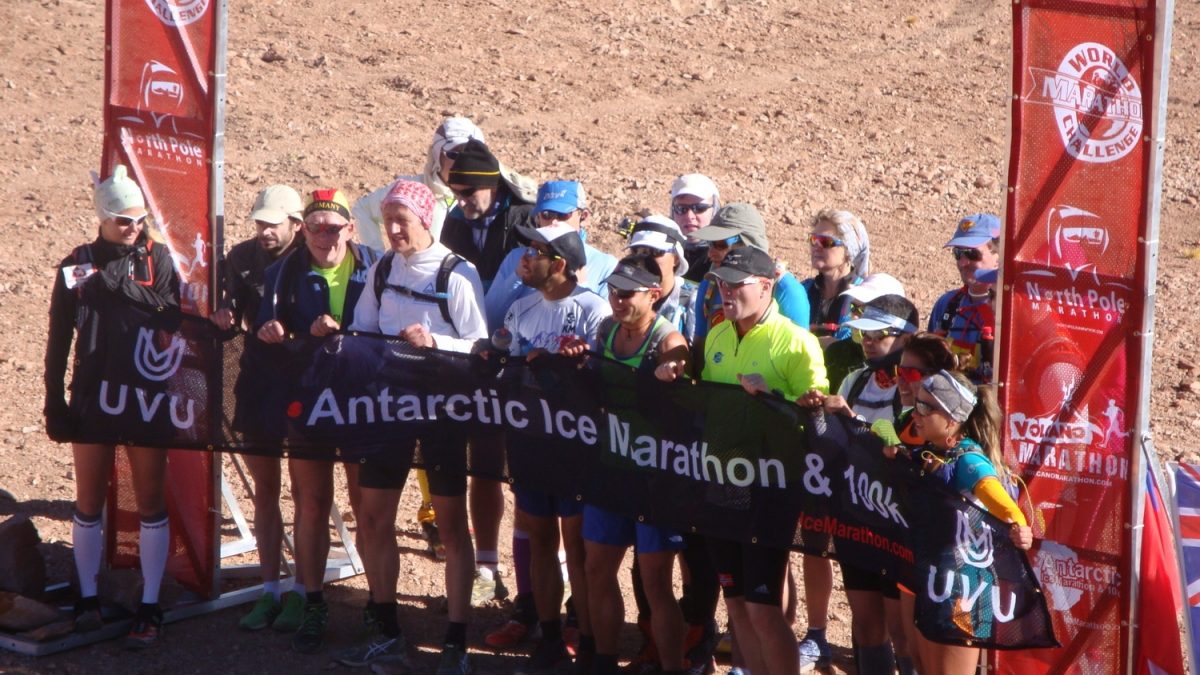 The Volcano Marathon -The Start

There is a danger an ultra-runner can become rather blasé about distance and consequently be somewhat dismissive of the standard marathon distance. Whilst I have been known to utter the words, ‘it is only a marathon’, I know all too well, it can come back and bite you, and that it has to be treated with as much respect as any longer distance.

I can honestly say, that the Volcano Marathon is the toughest, most gruelling event that I have ever done. What makes a race hard is not distance alone, but the combination of distance with other environmental factors and your ability to cope with them both physically and mentally. Add to this any mistakes that you may make (which often only become clear with the gift of hindsight) and you can conjure up a perfect storm. Here is my Volcano Marathon story.

The kit was laid out on the table, the MP3 player, phone and Garmin charged, the back pack and drop bags ready next to the electronics. The alarm was set for 5.45am but not needed as I spent most of the night awake with the usual pre-race nerves and Alasdair’s snores. I got up and followed my usual routine before breakfast at 6.30am. There was a bit of chat but most people were quiet, immersed in their own thoughts and preparations as they demolished food as quickly as it was being laid out for us. Then back to the room to collect our things before gathering for the mini vans about 7.15am.

There was none of the usual chatter in the van.  We all sat quietly watching the landscape as it passed by, sipping at various drinks.  Sandra started to check through her kit and set her Garmin. Good idea I thought and reached down to my bag, which is when I made the sickening, stomach churning realisation that I had forgotten my drop bags! How on earth did I manage that? They were on the table next to where I lifted my back pack from. My mind and heart started to race. Could I manage without them? The immediate response was to say to myself, don’t panic, you can manage: but I did panic because there were things in them that I was most definitely going to need, and the chimp definitely needed them.

Should I say something?

Should I keep quiet?

I called up front to Dave to say what I had done. The van stopped. I could sense everyone thinking, don’t go back, don’t go back. I felt terrible. Dave got out and made a call, he then called me to come out. He had Richard on the phone and amazingly he was going to be able to get my bags for me: how unbelievably lucky. I thanked him apologising profusely, then clambered back into the van feeling very embarrassed and not a little stupid. Everyone breathed a sigh of relief.

The landscape gradually changed becoming more barren and turning into desert. We turned off the main road onto a dirt road and started to climb up into the hills towards the start. The air was getting really thin now, and although the van was warm you could tell it was cold outside as the windows started to mist up. We knew we were getting close to the start when we started to spot the little red flags marking the race route.

As we came round a bend we saw the start gantry just ahead. What a desolate and barren but completely awesome spot. Rocky outcrops, stones and boulders, the volcano with the rising sun to one side, the setting moon hanging in the blue sky above a mountain to the other side and an open view over a small lake behind us. There was a brisk wind and it was freezing. We definitely needed those windproof shells and extra layers and I was wishing I had brought some gloves and a hat. Everyone was waiting until the last minute to remove outer layers. Richard arrived a bit over 10 minutes after us and handed over my drop bags with not a word of criticism. I was so grateful. After placing them in the relevant check point piles it was time to take off my extra layers and hand over my kit bag. We got the 5 minute call: time for a final pit stop.

We gathered at the gantry for some photos, and a minute’s silence in memory of Basti Haag who had placed 2nd in 2013, but had then tragically died in an avalanche in Nepal earlier this year.

Then the horn sounded and we were off down the track, the wind in our faces. Twenty five intrepid runners setting out on an experience of a life-time.

The rather brisk head wind meant I was exerting more effort and it was making breathing even harder, but there was nothing to do but put the head down and plough on. We were to have he headwind for 15km. After an initial drop the route undulated along on rough tracks. I was wishing that I had kept up my sand running as quite a few sections of the track surface had a layer of soft sand that was just deep enough to make the going a bit tougher.

The fast runners quickly disappeared into the distance leaving the rest of us almost literally eating their dust. The stunning landscape and views were a welcome distraction and it was living up to expectation: blue skies, red and brown ochre mountains, volcanoes and a haze of yellow created by the hassocks of grass and scrub bushes. There were even bones lying at the side of the track!

I kept glancing at my watch, the pace was pretty good and comfortable, often faster than I had expected. This did not concern me at this stage as my heart rate was sitting at a better rate than I had expected. My breathing was more laboured than expected due to the wind. One thing that I had not reckoned on being lef gasping for air when drinking through my hydration tube. It was similar when taking energy gels, and solid food was difficult to chew and swallow. Had I thought about it, I would have been better using bottles that I could squeeze the contents into my mouth. A little more thought would also have resulted in a different approach to nutrition and I might have opted for wetter foods that would slip down easily.

I realised that my cognitive ability and co-ordination were impaired when I struggled to operate my phone to take photos or do any sort of mental reasoning or problem solving.

On reaching the 10km checkpoint, I decided to keep the stop short so took a few slugs of energy drink and grabbed a gel. My water pack was fine. Now this should have been a bit of a warning signal. I had not filled it to capacity and had planned to top it up at each check point. With hindsight, it is obvious that I was not drinking and eating enough.  I had only eaten a few sweets and taken one gel up to that point. Good hydration helps to combat the effects of altitude as well as the effects of the heat; and based on the predicted number of hours I was going to be out there, I should have been taking on more. Problem was, consumption was hard and the altitude supresses appetite meaning that you have to make a serious and conscious effort. Not easy when cognitive ability is impaired.

A number of us continued to progress at a similar pace, leap frogging along as the pace ebbed and flowed with the walking breaks. It was a relief when the route shifted direction and the headwind became a cross wind. There was less loose sand now but the undulations were becoming more noticeable and my legs were becoming heavy, I had the sense that I was slowing and walking more frequently so tried to keep the pace up on the downhill and flat sections.

The landscape continued to be jaw-dropping and as we gently ascended we were rewarded with incredible views across the desert which was beginning to shimmer with a heat haze.

As beautiful as the views were I really wanted to reach the 20km check point. I was looking at my watch, but not really processing the information with the exception of the heart rate which was still steady, and was to remain that way for the whole race with only slight variations depending on effort and pace.

At last the half way checkpoint. I was about 2 hours 55 minutes in. My legs were beginning to burn now, and I was oblivious to the fact that I was simply just not drinking and eating enough. It took a minute to process the time, but I remember thinking that all would be good if I could maintain the pace. I might even manage 6.5 hours. How deluded I was.

There was quite a bustle as about 6 of us congregated, with someone hoping to get some medication for the altitude; he was out of luck.

I was warm and it was time to ditch the jacket and I decided not to use the change of top that that was in my drop bag. Sweat was drying instantly. I remembered to reapply sunblock. Thinking was just so hard and as for decisions, well forget it. Event the chimp was wandering around his cage in a dazed and confused state.

I downed one of my race staples: an espresso shot can, always so good and always hits the spot. I picked at some crisps thinking that the salt would be good, but it was just too hard to get them down and they rolled about dryly in my mouth. Similar to the first 10k I think I had only taken one gel and a small amount of liquids since the last check point, but I did top up my hydration pack.

It was time to make a move and tackle the next 20km.