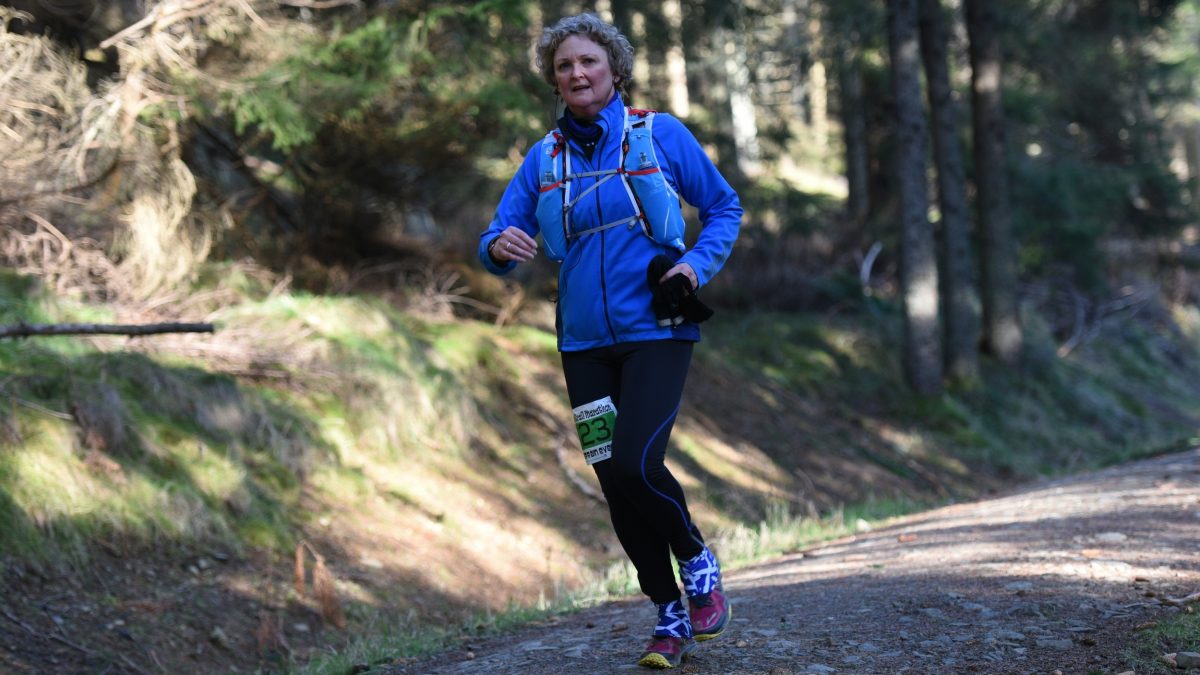 Having got up at 5 am, set out at 6 am we arrived at the Glentress Peel centre at around 7.45 am. It was a stunning morning: cold, frosty, sunny and no wind: a great outcome on the weather front after recent conditions and forecasts. The thermometer had hit -6 degrees en route and was sitting at -5 when we arrived. I was glad that I had picked up my down jacket.

I was entered for the full marathon and knew what I was up for: two hard circuits over the forest tracks, walks and sections of the black mountain bike trail. It promised almost 5k feet of climb. It would have been tough under any circumstances and prediction of 5.30 hours was wildly optimistic especially as I was under-trained and the race organisers set cut-offs of 4 hrs for the 1st lap and 8 hrs for the finish.

After bumping into Stan Bland on the way to register I settled back into the warmth of the car to do all the usual pre-start faffing about before heading back up to the start area. There was a long queue still at registration and I bumped into Janice Miller who was there to support a friend doing the half. She wished me well. Once inside the café area I spotted Elspeth who I had not seen for ages and we stood chatting before going out to the start area, where we spotted and joined Amanda, Shona and Stan. We huddled chatting amiably before the briefing and a strange parade round the café to enable the organisers to count us before starting about 10 minutes late.

We were off; up the hill and then a wee bottle neck as we dropped off the road and to the trail. We meandered our way over a great mix of well-marked tracks, paths and trails; some easy, some technical; through dense forest, popping in and out to be confronted by amazing views: climbing, climbing, climbing towards the highest point at the mast above the treeline and yet more beautiful views. As I trundled along I chatted with a few people and took a few pictures (most of which are unusable as the lens on my camera fogged up due to the cold).

On paper this had a lot of elements I like especially the paths through the trees. I truly love paths that run through dense mossy woodland and through heather. Initially I was enjoying myself, accepting it for what it was: a slow hard slog but a rewarding one with absolutely no expectation for speed or time. I could just settle in for the ride as it were, it was not as if I had anything else to do.  Then, just as if a switch had been flipped, I stopped enjoying it, probably about mile 10 or 11. As I reflect back on it I see that a number of factors came into play both on the day but also in the run up all of which contributed to this.

As luck (or not) would have it the half marathon runners reached me as I was picking my way along a section of narrow path. Some were happy to slow and wait for a spot to pass but quite a few were impatient, breathing down my neck which then made me feel compelled to stop, step aside and let them past, often with not a word of thanks. This was to be a bit of a recurring theme on the narrow sections. It was unsettling and meant I could not really get into a flow. That was blip number 1.

Blip number 2 was the descents. I was finding them tricky due to the hard and at times icy ground. This became increasing frustrating after the hut and the mast as I had hoped to make up a bit of time and ground descending. I had a few stumbles and skids, and then a full on fall. This was not funny. I was on orders not to injure myself.

Blip number 3 was the increasing lack of power on the climbs, which became very apparent on the last significant climb, albeit a short one, before the final descent back to the start/finish area. This was I realised due to my old nemesis: not hydrating and not eating. For some reason I had not made use of the opportunities that the climbs provided for getting food and fluid on board. By the time I slithered my way into the checkpoint I was frustrated, grumpy and sore. I was seriously considering calling it a day.

Alasdair was waiting patiently and diplomatically did not point out that I was half an hour behind schedule. I drank some coke, nibbled some crisps and went through the motions of getting organised to go back out in a very desultory manner whilst flip-flopping around with the decision of whether or not to continue. The longer I hung about the less likely I was to go on. I finally decided to call it a day. ‘Right decision’, Alasdair affirmed.

DNFs always hurt emotionally and mentally. There is no getting away from that. Listening to my logical head it was absolutely the right thing to do. In additional to the blips on the day I had come into this against advice; under-trained; and ill-prepared mentally, having been pre-occupied with some major hassles in connection with my global challenge that I want to do later in the year. Basically, my concentration was shot. I will notch this down to experience and now work hard to focus on the next two key events in my calendar.

It was a good and well organised event on a wonderfully challenging and scenically beautiful route. My only niggle would be with the logistics around the half-marathon runners barreling their way past on the narrower paths.

I do have unfinished business and so in true ‘Big Arnie’ Terminator style I can say; ‘I’ll be back’.