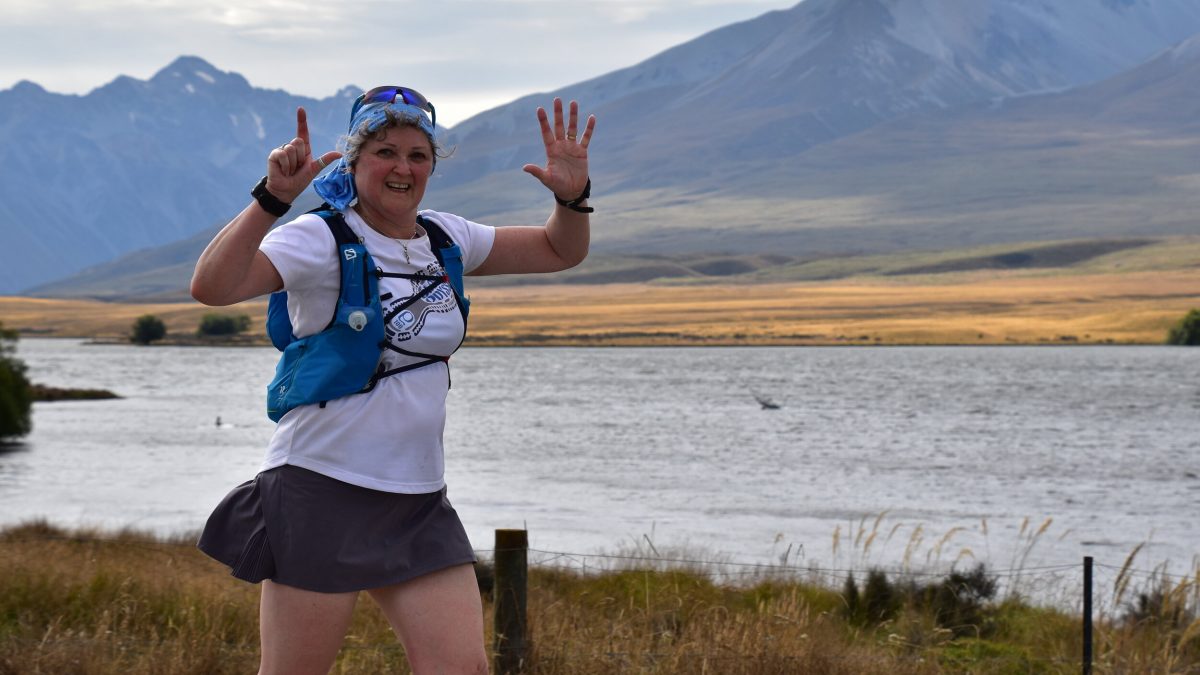 As ever I was the first person to rise the morning after the my 100k, and I needed food. The highly nutritious post run supper of crisps and beer had hit the spot at the time but did not provide quality recovery sustenance. I found coffee and freshly baked bread in the kitchen which I supplemented with our supplies to make a tasty if slightly odd breakfast. Then I sat in the quiet munching away and reflecting on the previous day.

It had been a smooth run; perhaps a bit short on adventure by Odyssey standards. Although there was a certain irony attached to being mildly hypothermic in the New Zealand summer after having survived Antarctica, the North Pole without the hypothermic experience. My body had held up and performed well given that I had had to come back to ultra-level fitness from almost zero.

I realised that this odyssey was about healing, about release. It did not need to be technically challenging because the challenge was mental and emotional; about having the strength to pick up again, start running again, build up again, to toe that start line, go the distance and go it alone. As the kilometres passed, I was shedding a burden; starting to run guilt free, feeling a sense of release and letting go of a significant amount of baggage. My brain processed and my heart began to sing again. I was feeling free and I was feeling joy (although perhaps not at Ranfurly).

We idled the morning away appreciating the remote location of the farm and the superb views, having a hobbit breakfast (I had some calories to make up); speaking to the other guests and to Peter (the owner of the farm). He was a character and it was interesting learning about the farmhouse and get an insight into his life. It is moments like this that add richness to the odyssey trips. We then headed towards the coast to Moeraki for a fabulous celebratory lunch at Fleur’s Place followed by a walk along the beach to see the famous Moeraki boulders.

Fascinating completely spherical boulders that have over the years emerged from the dunes.

Our accommodation for the next couple of nights was a house in Kaukanui, a small village a further half hour up the coast. It was a lovely open plan house in a tiny village perched on the coast, perfect for some R&R.

The next day we took a short drive along the coast to Oamaru; home to the Steam Punk HQ, artisans an excellent micro-brewery, and heart attack-inducing cruffins (enormous ‘muffins’ made from croissant pastry). I discovered that I am a closet steam punk enthusiast and had a grand time mooching around the shops and the steam punk themed play park.

This was fast becoming a trip filled with irony as I bought a beautiful fine merino scarf woven by a MacLean on a Hattersley loom that had most likely found its way to New Zealand from Harris. After Calum and Pat departed back to Christchurch, we of course sampled the local brew over lunch. After lunch we returned to the village for some beach time. We had great luck and saw a pod of Hector’s dolphins playing in the waves. Though we were not so lucky on the beach, having failed to appreciate that the tide was coming in we got a rude awakening and thorough soaking when the in-coming surf took us by surprise.

Next day we moved on heading inland to Lake Tekapo for a night. It was scorching. The air-con in our little car did a grand job, but stops were sedate and short. Tekapo is stunningly beautiful but it is also a tourist spot and the little village has been expanding to cope with the volume of visitors. Our accommodation was comfortable and stylish but was in a large and anonymous housing estate on the edge of the village. The village is also under provisioned in terms of restaurants and cafes for the volume of visitors and they are expensive. Never-the-less we had a lovely evening and were able to have a quiet walk at the lake side as the temperature cooled and dusk fell.

The next morning, we visited the little church of the Good Shepherd. This tiny church perched on the lakeside has a large picture window behind the altar overlooking the lake and mountains rather than the more traditional stained glass. Why put in stained glass when you can survey God’s work in nature.

Back in Christchurch we had a couple of days before the marathon. The centre of the city was unrecognisable. Our previous visit had been before the quakes. So many buildings had been lost that it seemed almost soulless. Life has returned but it is different. So, we contented ourselves with pottering around Redcliffs and Sumner.

Saturday, and the marathon were upon us. Our destination was the Hakatere Conservation Park a two-hour drive south-west. The route would take me along the Stour River track to Lake Emily, then on to the Te Araroa track to Lake Clearwater. I felt rested and relaxed as I readied myself at the head of the track. My parting comment was that I was just going to take it easy and enjoy the moment with this, my seventh continent marathon.

This was more familiar territory for me; an undulating path that followed the narrow river valley, gently climbing as it went. It had the feel of a Scottish glen.  The track then swung round to cut over a plain through a wider valley before opening out further and dropping down to lake Emily.

The day had started cloudy, warm and humid, and had steadily got warmer still as the sun broke through. I had several streams to cross and chose to take my shoes and socks off and paddle through them. It was cooling and saved me having to schlep along with wet feet.  It gave me micro stops to drink in the splendour around me. The views over Lake Emily and the plains were magnificent.

Alasdair, Calum and Pat were waiting for me a couple of kilometres down the track from the lake, just short of halfway. It was so hot now! Normally on a marathon distance I would not stop, or would quickly re-fuel and off, but today was different. I wanted it to be a relaxed and joyful experience to be savoured. On a practical level I know first-hand how debilitating heat can be, so I took the time to get some shade and cool off; to have a chat, eat, and stock up with plenty of fluids for rest of the run. I would not see them again until the finish at Lake Clearwater. Whilst I was running, they were going to the location used as the setting for Edoras (Rohan) in Lord of the Rings. I was just a little envious. Alasdair took so many photos!

The next few kilometres were along an unsurfaced road. It was furnace hot and every time a vehicle past it threw up clouds of dust that coated me, sticking to my sunblock and going into my eyes (even with my shades on). I passed some very ripe roadkill (blergh) and a dead possum in a trap. (A bit of a dead possum theme emerging).

I was glad to turn off the road back onto the trail hoping to pick things up a bit, but my body had other ideas. My legs started to feel like lead, my cadence dropped, and my energy levels dropped as if someone had just emptied the tank. I started to walk run. This shouldn’t be happening not this far from the finish. The terrain is not particularly technical and is just gently undulating. I have been eating and hydrating; I was hot but have been hotter. Normally this is the point where I start to get frustrated, push and fight and often stop enjoying the experience. Then I had the light bulb moment. All I needed to do today was finish: it was all about the finish and finishing happy.

I found a nice spot at the top of a rise, looking down into a dip in the plain before a further rise; sat down pulled out a snack and took a moment. Feeling a little refreshed I ran down the hill and then decided to mostly walk the next few kilometres enjoying the sun and surroundings, marvelling at all the tiny butterflies. I met a group of trekkers coming the opposite way, the first people I had seen on the trails all day. They were surprised to see a runner and commented on how hot it was and were not surprised that I was struggling a bit and having to walk. As I topped the next rise, I found myself looking down over Lake Clearwater, the end was in sight.

Suddenly I found a new energy and picked up the pace as the trail zig-zagged down towards the lake. When we had plotted out the route I had envisioned running along the shore of the lake, but the path dropped down below it to wend its way through a small gorge. I had a couple of stumbles on the narrow and gnarly path: careful Audrey, you don’t want a nasty fall now.

The path then joined a track which followed the top end of the lake shoreline end and after a short climb started to drop down to the village of batches (holiday cottages and huts).

It was cooler now. Some cloud had moved in and it was also adding a beautiful atmospheric light to the view down the lake. Then I spotted a familiar figure coming up the track: Alasdair. He walked along with me for a short distance while I apologised for taking so damned long and we discussed the options to get my distance as I was going to be close to a mile short as I reached the village. Option 1 go through the village and stick with the lakeside track, option 2 go round the neighbouring small lake (probably too long), Option 3 take the road out of the village.

Calum and Pat were waiting in the car park. Calum got a taste of the diva when I snapped ‘too far’ at his suggestion of running round the other lake. What did I do? Total indecision led to a mad loop round a kid’s mountain bike track and a short dog-leg along the road out of the village. What I did know was that it was a lovely spot and it seemed right to finish on the shores of Lake Clearwater.

And there it was: I was running back into the car park, finishing 26.2 miles on my seventh continent. It was not a grand hurrah, it was not a big city marathon; it was fitting and true to me. It was a solo challenge over a tough, never run route supported by the people I love and quietly celebrated with the people that matter.

We did indulge ourselves a couple of days later with a final delicious celebration lunch with fine wines at the Black Estate Winery (Waipara) north of Christchurch.

As I complete this we are three weeks into the Covid-19 lockdown. The New Zealand trip is a lovely memory and it feels so long ago. The Global Odyssey is on hold. My dream, my plan, to run my last Global Odyssey 100k; the seventh continent, seven years after I ran my first 100k, on my 57th birthday, and to get the whole odyssey on one passport has gone. But I have the hope and the determination and I will re-plan because the symmetry of numbers are of no consequence. What matters is the finish and when we come out of this there will be a glorious finish.