Global Odyssey Morocco 100 – It was my day (finally) 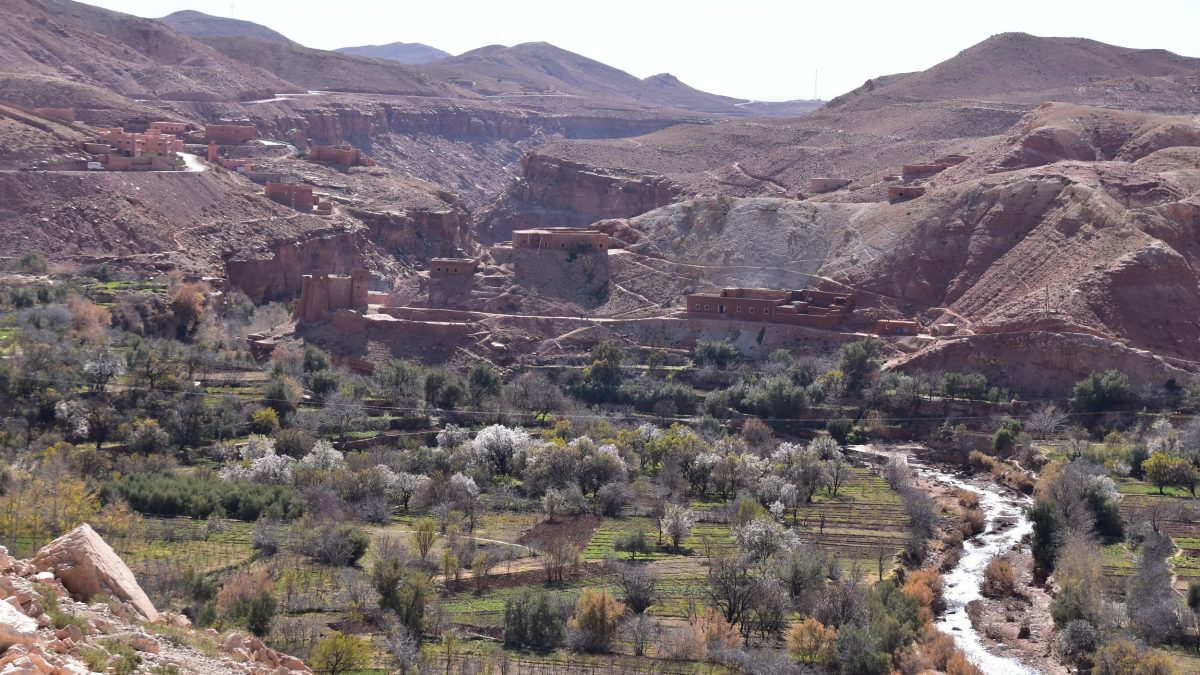 Nature finally let me pass, allowed safe passage and I completed the African stage of my Global Odyssey 100k challenge. It was my day. I rocked it.

Africa had become something of a nemesis: three attempts in nine months. The deserts defeated me twice. It took Odysseus ten years to return home from the Trojan wars, a journey that should have taken a matter of weeks. How long was this going to take? ‘It’s all part of the odyssey’, people said, ‘it’s a true odyssey’, they said. Indeed, but how many attempts will it take and how long? I’m not getting any younger you know.

Plan C was Morocco in January. Was North Africa in winter cheating? When I posed this question to a good friend the response was, ‘No more than Antarctica in summer’. Ouarzazate, south of the High Atlas Mountains, was the destination; the gateway to the Sahara. Run route could be desert or the low hills.

The price of failure. My winter months are usually my kick-back time. A period of reduced mileage focusing on shorter runs, intervals, hills reps, enjoying more free time and not stressing the inevitable schedule chaos that is December. This was the first time that I had to maintain ultra-marathon training through the winter, and for someone as slow as me, fitting those long runs into the short days was a challenge. But I did it: I managed to squeeze in my longest run two days before the shortest day, starting in first dawn light and finishing in the last light of dusk. The festive over-indulgence was managed carefully, and I was ready to attempt Africa again.

The first day in Marrakesh was a bit of a culture shock: so many people, the labyrinthine souks, the constant attention, a myriad of sights and sounds. Our riad (Riad Lamzia) was exactly as described, a haven of tranquillity in the heart of the medina, on the edge of the souks and just a five-minute walk from the Jemaa el Faa square.

Fresh mint tea was a revelation; so good and refreshing. It would become a bit of an addiction almost equal to my love of coffee.

Then there was the night time street food market that sets up each day about 4pm, taken down late evening and set up again the next day every day of the year which was, as warned, a full-on experience for our first dinner in Morocco.

Day two after a leisurely visit to the very beautiful Secret Garden in the medina, we travelled over the Atlas Mountains to Ouarzazate.

A journey of at times tortuous climbs and constant twists and turns as the road wound its way over. In January there should be snow on the mountains but there was none. The snows were late and was becoming a matter of concern. Morocco is so dependant upon the water that comes from the springtime melt.

Apart from being the gateway to the Sahara Ouarzazate has another claim to fame. It has been used as a location for many movies and as we approached the town we passed a couple of studios and could see some of the sets built for Game of Thrones, Gladiator, The Kingdom of Heaven and Cleopatra to name a few.

After checking in to our accommodation on the edge of the town we managed a rather spectacular orientation fail and missed the town centre, giving us a rather skewed impression and greatly reducing our dinner location choice. An issue that we did not fully resolve until the day after the odyssey run: idiots!

The next day was another first. We all went out to do a route recce: I was the one who was going to run it, so I should have a say in it. We set out along the Ounila Valley past the UNESCO site at the Ait ben Haddou kasbah towards Telouet undulating through stunning landscape dotted with small villages, kasbahs and mosques.

Perfect, except for the amount of tarmac. The road used to be dirt, but there had been a programme of upgrading it and we stopped after 60k. There was no way I would or could run 100k on tarmac. Time for a re-think. We decided to return to Ouarzazate and look at a desert-based route, but that would be flat with a high potential for boredom to kick in. As we wended our way back Pete (expedition leader) began to scan wide and look beyond the road. We had already spotted that there was still the residual remains of the original dirt road at the side of the new and others where track ran parallel. Pete also spotted that I could drop down off the road and run through some of the village off tarmac. Then there was a section where I could cross the river and run parallel on ‘donkey tracks’ between the villages on the opposite side of the valley. We could do an out and back mainly off road. That could work. We had a plan and I certainly would not get bored. It worked like a dream on the day: 90% off road, 10% tarmac.

The big day. I was up at 3 am to eat breakfast before a 4:15 departure and a 5 am start. It was dark and hovering around zero degrees as I set out relaxed and ready for the day’s challenge. Check-points had been planned every 10k with the odd numbers being a quick ‘how’s it going, do you need a refill’ stop, and the evens slightly longer proper re-fuelling stops. Sunrise would not be for another two hours or more. An added benefit of the previous day’s recce was that we had been able to see the early part of the route and Ait ben Haddou in the daylight. Both passes today were in the dark.

Dawn seemed a long time coming, and I got hopeful when I started to hear some cockerel crows but still no sign of light towards the east. Then the morning call to prayer started, first one mosque, then another and another as it reverberated down the valley: just amazing, magical. Finally, that light in the eastern sky and black turning to grey as I approach my 20k checkpoint and ditched my headtorch. It was lovely going through the villages as the children were going to school and encouraging me on.

Soon the 2k long climb loomed ahead. The support van checked in with me and said they would pull in at telecoms mast at the top. I seemed to power up it in no time and was feeling good, strong and positive.

One van, three guys and they had one job, one job. That job being, to support the runner and maintain a visual throughout. Over on the opposite side of the valley I picked my way along the technical paths giving them the occasional wave.

As I approached to point where my path re-joined the road I saw Alasdair and waved. The van was stopped next to a spot where a footbridge crossed the river: do I go over the foot bridge or continue another 50m to the road bridge? Old woman about to cross the footbridge. I pause, I wave again and point to the road; I continue, stop again at the junction, wave, point in the route direction and continue expecting the van to draw level and continue ahead. No van. Odd. Crack on. I reach 45k feeling good. A good milestone and a mental boost, the furthest I have run in Africa.

It’s really getting warm now, sitting in the high teens. I Stop to remove my jacket and still no sign of the crew. Odd. Crack on. Supplies are running perilously low. I am now getting close to 50k and the turn point. WHERE THE HELL ARE THEY? Have then have a breakdown, an accident, have they stopped for food? Just as panic is setting in, at 49.8k they rock up, leap out of the van saying, ‘You gave us such fright, what happened to you?’ My response what, ‘What happened to me? What happened to you?’ Apparently, it was and still is all my fault that they did not see me coming off the path. I was the unnoticed gorilla in the background while they were all looking at the old woman. You had one job guys! The excitement over we mark 50k and turn and I knew; I just knew that I had it in the bag even though I had the same distance to go.

The tracker showed the outward to be a steady overall ascent and so a ‘easier’ faster return was predicted even with the undulations and my growing fatigue. I had planned to stay on the donkey paths on the far side of the valley beyond the original entry point, however, they were technical and slow. After a few stumbles I decided to keep to the original route and on my way down a slope to the river crossing lost my footing collecting a cut finger.

The word had about the crazy running lady had got out and as I passed through the villages as the children came home from school I was getting lots of high fives and encouragement from both children and adults and a fair few calls of ‘fatiguez?’, ‘bon chance’ and ‘courage’. I just kept checking off the kilometres. My energy levels were good and although tiring I was not getting deep dips. Alasdair and Pete were worried I was not eating enough but I felt as if I was managing fine, topping up little and often. Talk about consistent. At the 80k stop dusk was falling and Pete predicted about another hour of light and reminded me that the temperature would drop significantly. I picked up my jacket and head torch ready.

The finish as in sight. At 90k I was a bit wobbly, but a good slug of coke set me right. I predicted quite a few walking breaks in the last 10k, no problem was the reply. Between the very slight descent and the support van never allowing me to fully catch up before moving off again I was able to mostly run that last 10k. Suddenly, with 500m to go, out of nowhere, a random runner appeared from behind and fell into step. What were the chances? He accompanied me to the finish.

What a day, what a run: 16 hours 38 minutes. My fastest continent to date. Thank-you mother nature.

Back to the hotel and a great welcome and congratulations from the staff. The next day was a rest day which we spent walking, not too stiffly, around Ouarzazate, (having finally, got our bearing and found the centre of the town), and chilling in a café in the square. The man in the little supermarket recognised me from the day before the run and congratulated me on completing it.

Then back to Marrakesh for a final day of R&R visiting the splendid Majorelle Gardens, the stunning Bahia Palace and shopping in the souks and sampling street food from stalls in the medina.