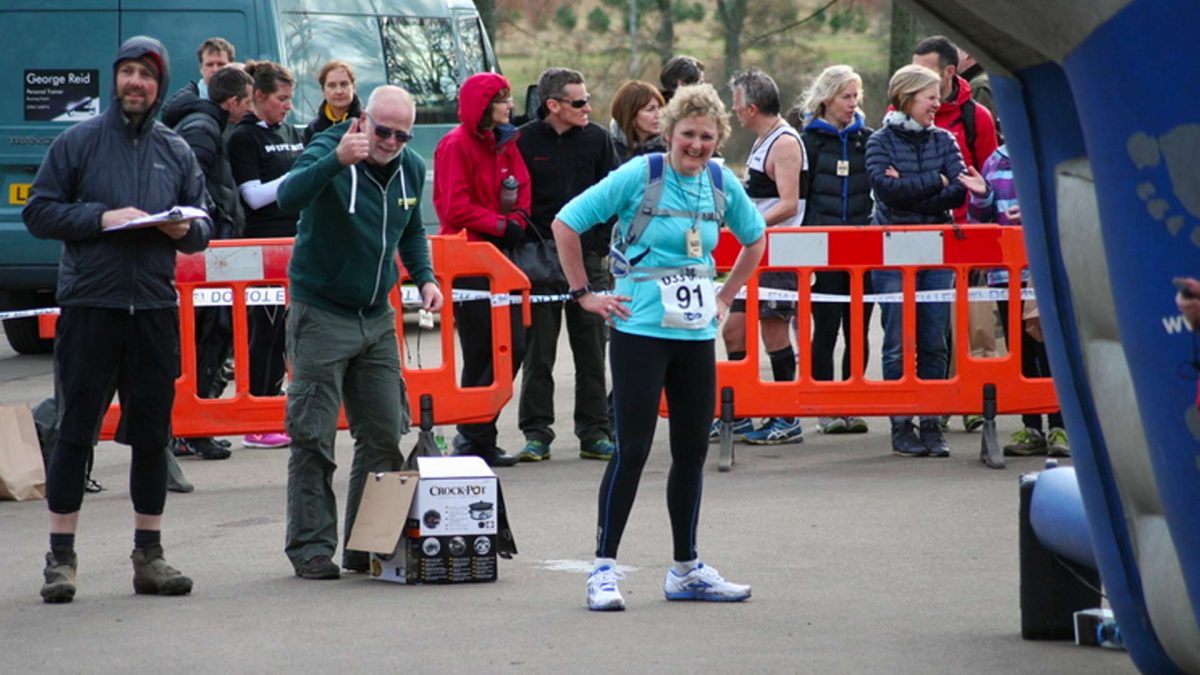 In recent months and blog posting I have devoted a lot of thought and spoken about the life changing effect of my Antarctic Odyssey and pondered on what the future holds for me. There is with no doubt a legacy, and an on-going Odyssey and my recent participation in the D33 marked the first step of the next stage of my journey.

Similar to 2013 I set it as a milestone; my first event of the calendar year (and my first since Antarctica) and a chance to see where my base fitness was at, also a key stepping stone en route to the Hoka Highland Fling. I had no real feel for how this would go and was actually rather nervous about it, worried about my and other people’s expectations, which was rather ironic coming from the woman who claims to not care about other people’s expectations. I knew I would finish because I know I can do the distance: and as someone pointed out,’ there can be no more DNFs for Audrey McIntosh’, (so no pressure then).  I  was pretty sure that based on the level of training I have been doing I could expect to finish in roughly the same time as last year, somewhere between 6.30 and 6.40, but more of that later.

As ever the ‘Do Epic Shit’ team of George, Karen and all the marshals did a superb job with the organisation of the event. This event has been growing from year to year and this year there was an amazing buzz to the event. A great deal of thought and attention is put into it from the bottles of race beer with bespoke labels, to the hand crafted medals and the limited edition ‘Do Epic Shit’ tees and vest. I made sure I got down to registration early doors to bag a vest! All the thought and effort, and the great support from smiley and encouraging marshals are greatly appreciated: thank-you.

It had been a fine week for weather and weekend was shaping up to be dry, not too windy and a reasonable temperature just into double figures: ideal running conditions. The course was reported to be dry underfoot, and my recce runs earlier in the week and the previous week bore that out. This proved to be the case on the day. Excellent conditions and very different from last year when it rained throughout and the going underfoot was tricky in places with lots of water and mud.

It was good to meet up with my fellow runners and friends at registration and before the start. This was the first I had met most of them since my endeavours last year. It felt good to be back in ‘the body of the kirk’, as they say, and to feel that quiet recognition of my achievement.  Soon we were mustering at the start for the race brief, and then we were off heading out of Duthie Park and onto the Deeside Way, which follows an old railway track along the river Dee and in our case down to Banchory and back. It is a flat route with the odd short incline and a mix of tarmac and good solid trail or track; nothing technical. I quickly relaxed into it and started to run my own race. As an unashamed back of the pack runner I can happily do my own thing and settled into my 12 minutes of running and 3 minutes of walking routine which this route lends itself well to, taking sips of fluid on the walking intervals and fuelling on every 2nd walk.

After about 5 miles I realised that I was going at a fair clip in my running intervals: I would need to watch that. The Deeside way is a familiar path to me now, not only from last year’s event but also from regular training runs on it whilst I worked in Aberdeen last year. We meandered our way out of Aberdeen and transition slowing into the countryside. I must have been a source of irritation to some of my fellow runners as we leap frogged along the route. I was still strong and fresh at the first check-point a bit over 8 miles, where I had a brief stop to eat some creamed rice and take a can of espresso shot re-stock my back pack and off again. I was still comfortable with the faster pace.

I just kept knocking out the steady intervals and soon saw the front runners on their return at pretty much the point I expected. The shuffle of music on my MP3 player was a good mix keeping me relaxed and upbeat; we had little bursts of sunshine; and it was shaping up nicely, although quite warm at times. I saw Noanie on her way back looking strong and ‘going for it’ which gave me a little happy moment and spurred me on. Similar to last year that last couple of miles to the turn point seemed to go on forever, but I got there, and I got there way ahead of schedule by about 20 minutes. Now that was worrying.  I chatted briefly with Julie and Sandra, and there was a bit of banter about it being too warm for me and that this would be a walk in the park compared to what I had done.  Some more creamed rice, a few cashews and flat coke, back pack re-stocked and I was off again.

The leap frogging continued, and also I started to overtake people, my steady pace paying off. After the ¾ check point I did start to slow and with about 6 miles to go some of the runners I had been leap frogging with overtook me and maintained their lead on me. This did not bother me too much as I knew that I was running the race I wanted to run and that I was surpassing expectations. I realised with 5 miles to go that I was going to finish quite a bit earlier than predicted, but was unsure which side of 6 hours I would be, but assumed it would be over, and so made the decision that I would be extremely happy with somewhere close to 6.15. At that point I also realised that I was going to have to contact Alasdair and tell him that I was going to be early. At the next walking break I fished out my mobile and called him, explaining how far I still had to go and that it would be closer to 3pm that I would get back. Luckily he was not far away and said that he would be there: ‘so much for being slow’, were his parting words. He has always been better with the maths than me, and clearly worked out that at that distance at that time I was probably going to be very close to 6 hours and that my prediction was wildly inaccurate.

By this point I knew exactly where I was and I kept looking at my watch not quite believing what was happening. I was tired now but I was going to keep pushing. Over the two foot bridges, alongside the graveyard and I was so close; under the bridge and along the perimeter of the park; the flagpole; I daren’t look at my watch; the end of the pathway in sight; nearly there, nearly there. As I ran through the park gate I dared to sneak a look at my watch: I was going to be under 6 hours! I pushed for the finish and crossed in 5.57. I had knocked 45 minutes off last year’s time!

Who would have thought it? Everyone except me apparently. I did not think I would ever get sub 6 hours for that distance, especially with my run/walk intervals, but that extra speed on the runs made all the difference, and I my walking was probably quicker too. Of course I am a good stone lighter now, fitter and with more miles on my legs, so yes, in one sense I should have expected it. On the other hand I had taken things pretty easy in December and had missed a couple of long runs in the lead up to this, but clearly the fitness from Antarctica was still very much there to take advantage of and to build on.