The Desert Strikes Back 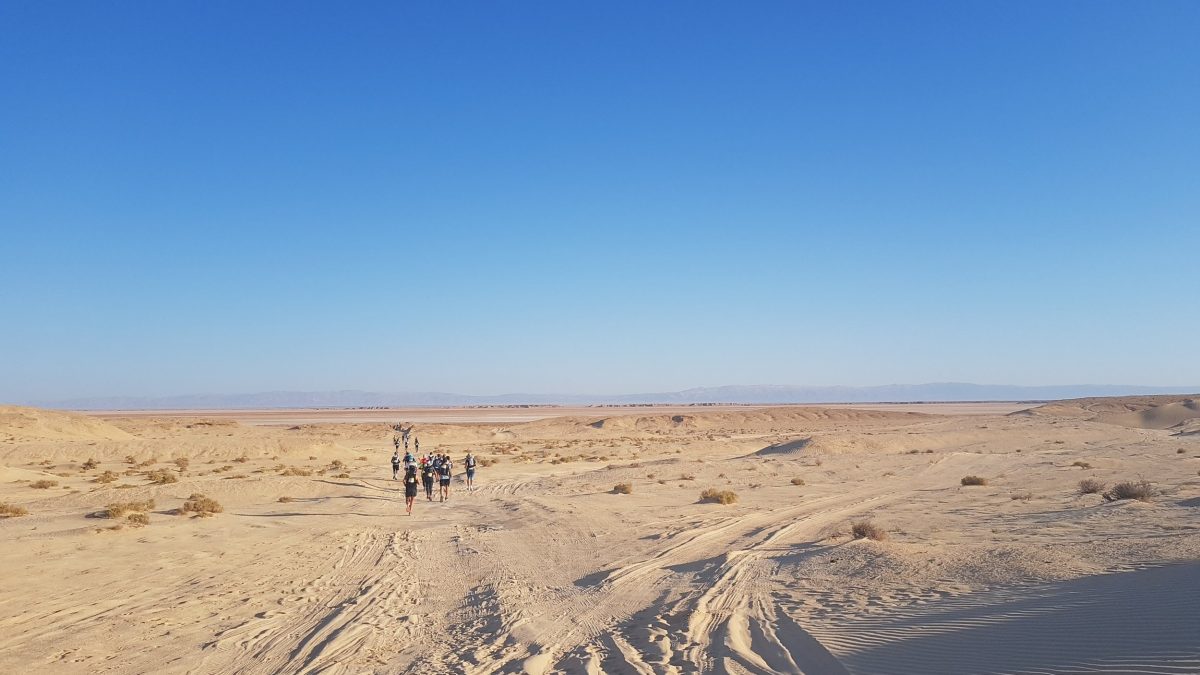 I must be honest and say that this blog entry is tinged with disappointment and frustration at my second failure to complete the African stage of the Global Odyssey, but I am entirely comfortable with my decision to abandon forty-five kilometres into the 100k Ultra Mirage el Djerid event.

This is the nature of the challenge and what the Global Odyssey is about. If you succeed every time you are not truly challenging yourself. An odyssey is an epic, a journey: a journey that presents mental and physical challenge, that incorporates success and failure and through which the traveller grows stronger and wiser. Knowing that failure is part of success, still does not make it any easier to accept; but then that is what drives you to continue until you do succeed.

I spotted this event after my failed attempt in Namibia. The race HQ is based at Tozeur in southern Tunisia, and the slightly over 100k circular route is run over a series of tracks, roads and trail through salt lakes, along the edges of palm groves and over sandy ground on the edge of the Sahara. Whilst not technically challenging it is exposed and hot. The event is in its infancy, this being the second edition with a field of 128 (compared to last year’s 60) representing twenty-three countries toeing the start line. This along with the location and the principles of equality (equal prize money for male and female entrants) are what attracted me, (not that I was ever going to be contending for a prize). Also, my determination to try and succeed in the African deserts.

The event also offered a friends and family package which was a great idea. For Alasdair it meant that he could join me, be ‘off-duty’ and enjoy a day of sight-seeing. He had a great day out touring the desert, visiting a spring in the Atlas Mountains and sampling traditional cuisine. (And, no I did not realise that the Atlas Mountains reached into Tunisia either).

The event organisation was good from start to finish; from responding to initial enquiries and questions, assisting with additional activities, to provision of regular updates via social media and creating a strong camaraderie amongst the ‘Brave Hearts’, to the all-important race day logistics and support. There were challenges on the day for both organisers and runners: we all learned. I extend a huge thank-you to the race director and his enthusiastic team of supporters whose dedication and enthusiasm made the event special. Every event, no matter where, depends on supporters who volunteer to look after the ‘brave hearts’.

I arrive at the planet Tatooine bathed in the early morning sunlight. No, I was not dreaming: the race start/finish was at the Star Wars set in the Chotte el Djerid, the largest salt pan in the Sahara. As the start time approached what had been a quiet murmur rose to an excited hubbub. We were off, heading out along a hard-packed track into the salt pan with the Atlas Mountains in the distance. There was a serious party happening at the back of the pack with lots of shouting and whooping and merriment. I wondered how long that would last and decided to push forward a little away from the party.

The first twenty kilometres went pretty much to plan. The forces was with me.The landscape and the shimmering views over the chotte and the mountains were awesome. There was a bit of soft sand on the track which we had been told to expect after several sand storms in the days prior to our arrival. Most of us did not have desert gaiters having been advised that the route was mainly hard packed underfoot. My shoes filled up and I had a bit of an ‘oh no!’ moment, but then they emptied themselves out, all good. Glad I packed those shoe emptying pixies.

My plan to run intervals of twelve minutes running three minutes walking forgotten in the moment as I trotted along comfortably full of energy admiring the views. The heat, however, was building. I assume I looked like a broiled lobster when I arrived at the check point as they instantly set the water spray on me which smelled suspiciously of insecticide: nice. This was unexpected and not really appreciated on my part. This checkpoint was organised chaos with enthusiastic helpers pulling off my pack, pulling out the bottles, pushing water and food at me. All a bit too frenetic and stress inducing. I was not able to take the few minutes of calm to settle myself, calmly step through my checkpoint routine and prepare for the next stage. I was on track though 1.5 hours ahead of the cut off.

Back out on the track I jogged along for another five kilometres or so before my first wobble set in and I found myself walking; and walking; and walking with a few running intervals thrown in: doing more walking than running. Yes, it was hot. I was not going to be adding much to the time in the bank but if I could just keep a safety net and hope that come the evening I would speed up. After passing a date plantation where there was an appalling amount of plastic litter across the landscape the route turned onto a tarmac road. It was baking and I eventually resorted to crouching down and squeezing into a tiny patch of shade from a palm fence for a timed stop to cool off a bit. I could be onto something here. Once I got going again I started to count my steps, never a good place to be. Eventually the route turned off the road and back onto a track that gently inclined up the side of a date plantation to the second check-point. This was a calmer more relaxed affair and I decided to take a longer than planned stop: drink, eat, cool off and regain my equilibrium.

It was worth it. I left the check point feeling more energised and at a good trot. The route turned onto a section of road again and past some dwellings before turning off into the desert at which point there was a marked change in the terrain. The route became uneven and consisted of soft sand which started to fill my shoes and the sand emptying pixies had done a runner. I had a bad feeling about this. There were small scrubby bushes and plants, but nothing that provided any shade, although I did try sitting under a twiggy bush. The heat was STILL increasing and there was absolutely no respite, but I kept moving, plugging away at it. My plan, get to the 50k check point hopefully a couple of hours ahead of the cut off and take an hour to rest and recover. At this point that still manageable.

I spotted snake tracks in the sand and thought back to my recent seat: that could have come back to bite me in the bum, literally. Blimey. Every now and again a lizard scurry away and that was it for wildlife. It was too damned hot for anything else.

I passed some discarded medical packaging: was that from today? Had somebody been pulled from the course? Waahh! Then I spotted someone in the distance. They were moving very slowly. As I got closer I could see that they were carrying their backpack in their hand which was a little concerning. I decided to pick up the pace and check if they were OK. This is what you do even if means overheating.

When I reached him he had put his pack back on and was Ok, just suffering with the heat and the terrain. I suggested a brief stop under my foil blanket. He declined, but sat for a minute before continuing. I pulled my foil blanket out and hunkered down under it. I could just lie here for a while. The heat and my fatigue were starting to affect my ability to think. How ridiculous was this situation? How ridiculous did I look? Like the Sunday roast covered in foil: ready for a good baste.

Two other women caught up with me and we agreed to continue together, but I just could not keep up. My legs were heavy and moving took so much effort and the pressure from the sand in my shoes was seriously uncomfortable. I started to feel very vulnerable, and began to wonder what would happen if the heat got to my like it did in Namibia and I needed help? How long would I have to wait? I later found out that the temperature had gone up to 39 degrees or more.

There was a security vehicle up ahead sitting on the brow of a hill. As the other women passed it they must have said that I was not looking good because the vehicle drove down to me. They asked if I was alright. I think I need to quit. They remind me that it’s only five or six kilometres to the next check point: only. That was going to take me between 1 and 1.5 hours. Was it worth it? My plan to rest up would have to change. Would I be able to press on in this heat without a break?

It was time to quit: I knew in heart and my head. I got into the van and was driven to the check point. Ironically, I had been gaining on other runners. It was desperate to see them battling with the terrain and conditions, many looking completely broken. The check point was like a battle zone; bodies everywhere and people being tended by the volunteers and medics. They were so kind. Someone took my shoes and socks off and washed my feet, others gave me water and food and sympathised with my decision to stop and providing assurance that I had made a good effort in extremely hard conditions.

My race was over. Huge respect to all those who persevered to finish, and also to the 37 other people who made the tough decision to abandon.

There are positives to be gained from the experience. I got further in hotter conditions and harder terrain than in Namibia. I got my fluids and nutrition more or less right. Salt tablets are a must in these conditions. I was in total control of my decision to stop. A definite improvement over Namibia. And I definitely did not promise anyone a games room.

Africa, however, is proving to be something of a nemesis. Alasdair’s sage advice;

‘Stop messing about in the desert and just get Africa done and under your belt. You can go back to the deserts after you have completed the Odyssey.’

Hopefully, it will be a case of 3rd time lucky and I will defeat my nemesis with a trip to Morocco in January 2019, where the climate will be a bit more temperate, there will be a bit less desert and some undulating foothills in the low Atlas Mountains.